The Williston boy’s basketball team is set to take on Eastside high school on Friday night. As the season winds down, both teams sit with similar records and each need a win to help set up a district run. Here are some storylines to look for as the two teams take the court.

The Red Devils will be looking to get revenge on Eastside after their last meeting where the Rams won by 21. In order for redemption to occur, Williston will have to do a better job of defending Aziel Gainey. The junior guard averages just over eight points per game, but went for 12 against the Red Devils in December, knocking down 71 percent of his shots. They will also have to get solid play from their guard position, especially junior Keith McGuire. McGuire began the season on a tear, averaging 16.5 points per game in the opening four contests. If he is playing at the top of his game, then the Red Devils will get their revenge on the Rams.

Besides the names mentioned earlier, there are a couple other names of note in this one. One such player is Korin Bradley for Eastside. The 6’1″senior guard is averaging just over 18 points per game and is the engine that makes the Rams’ offense run. He has scored double digits in 15 out of 16 games thus far, going for more than 20 in eight of those games. Williston did a decent job defending him last time the two squads met, as he scored 13. Expect Bradley to be much more involved this time around.

Another player to watch in this one is Rashaud Nelson from Williston. The 5’10″ junior guard dropped 25 points in the Red Devils’ opening game against Bronson and is a threat to go off at any given moment. Look for the Rams to key in on Nelson and try to limit his production as much as possible.

After Friday, both teams will be nearing the end of their respective regular seasons. For the Rams, they will have three games left, including one against rival Gainesville High School. As for the Red Devils, they are currently sitting in the middle of the pack of their district. A victory against Eastside would propel them up the rankings and give them momentum headed into the playoffs. They have just one game left on their schedule after the Rams, against Crystal River High School on February 4th.

Tip off will be at 7:30 PM EST at Eastside High School.

Michael Hull is a sophomore at the University of Florida and is currently studying Journalism & Sports and Media.
@Michael_Hull33
Previous Preview: Eastside Boys Basketball Goes Against An Equally Matched Team, Santa Fe High School
Next No.2 Gator Gymnastics face off with No.12 Wildcats 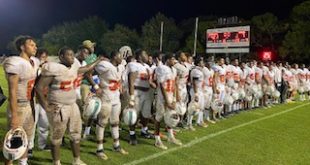 Eastside falls to 0-3 after a tough loss to Buchholz