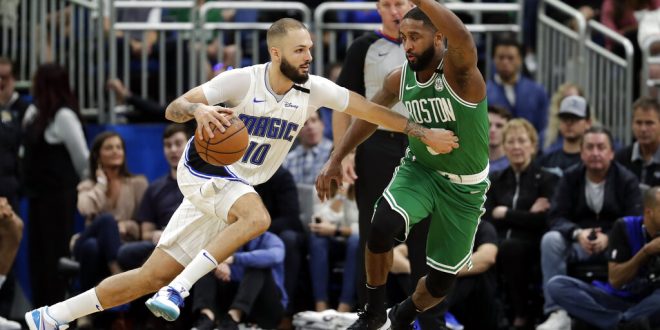 Magic hope to beat the four game streak against the Celtics

Wednesday night the 22-28 Orlando Magic take on the 34-15 Boston Celtics at 7:30 p.m. If the season were to end tomorrow, the Magic would finish in the eighth seed for the Eastern Conference. They are currently six games under .500.

Compared to the Celtics, the Magic has suffered numerous injuries. Jonathon Isaac is out with a left knee injury and Al-Farouq Aminu out with his right, both have season-ending injuries, while D.J Augustin is set to be re-evaluated in 3-to-4 weeks after being diagnosed with a left knee bone irritation on Thursday. As of Feb. 3rd, Khem Birch is also injured due to lower back tightness.

The Boston Celtics have Robert Williams III out but will receive scans on Tuesday to see if he is eligible to return back to the lineup. Kemba Walker is out with a knee injury while Marcus Smart is out for a thigh injury he suffered in Monday’s game against Atlanta. With a four-game win streak, the Celtics are looking to receive their fifth against the Orlando Magic.

This week’s schedule is a little easier on the Magic. On Monday night, they beat the Charlotte Hornets 112-100. This gave the Hornets its 11th loss in the team’s last 12 games. Attempting 34 long-range shots, the Magic made 16 out of the 34. In the first half, the Hornets lost the ball 10 times to the Magic and blew a 19 point lead to the Spurs the game before. Nikola Vucevic had 22 points, Aaron Gordon scored a total of 16 and 12 rebounds, Evan Fournier added 17 points while Markelle Fultz scored 12 points with 14 assists. The Magic’s last win before the five-game losing streak was against the Charlotte Hornets – a bittersweet feeling to snap the streak.

Orlando takes on the Boston Celtics on Wednesday before heading to New York to play the Knicks. Previous to this week, the Magic lost five straight games and failed to even reach 100 points within them.