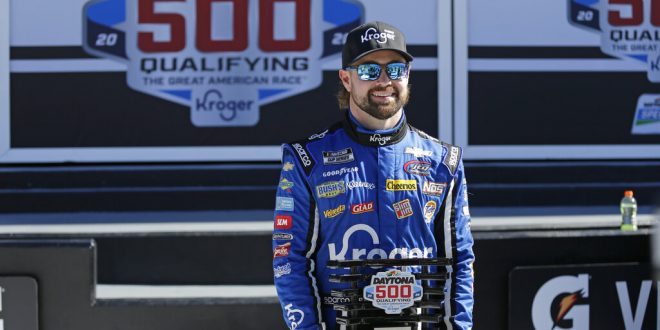 Pretty special day yesterday for me and my whole @JTGRacing team. It was a all hands on deck team effort to build the speed into these cars and I’m thankful it worked out to grab the pole for the #greatamericanrace #daytona #daytona500 #shapedlikeabullet pic.twitter.com/EHpOOzmThg

“I am ready to go win races with the ultimate goal of making the playoffs and competing for a championship,” Stenhouse Jr. said shortly after announcing the switch last year.

The 32-year-old driver out of Memphis will start in the front row in for the third time in his career and the first time in the Daytona 500. He began his NASCAR career in 2013 and quickly made an impact, as he won the Sunoco Rookie of the Year Award.

Joining Stenhouse Jr. on the front row is Alex Bowman, who will drive the No. 88 car for Hendrick Motorsports. Bowman’s rookie year came in 2014 and since then, he has one NASCAR Cup win when he finished first at Chicagoland Speedway in 2019.

As for the rest of the pole, Chase Elliot, Jimmie Johnson and Denny Hamlin round out the top five, respectively. Hamlin won the race last year despite posting an average speed of 137.44 miles per hour, the slowest speed for a winning car since Jamie McMurray won in 2010.

Other notable positions include Kyle Busch at 6, Joey Logano at 11, Kevin Harvick at 12 and Martin Treux Jr. at 21.