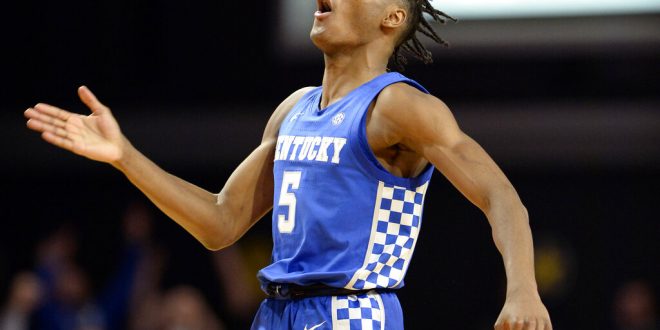 SEC Standings: Kentucky holds onto first place with LSU and Auburn right behind

For Men’s Basketball, the SEC has three teams ranked in the top 25. After several conference matches on Tuesday night, the SEC rankings are starting to make sense.

Kentucky is ranked 12 in the nation, which should surprise no one. The Wildcats are consistently among the top teams that hope to make a splash during March Madness. On Tuesday night, the Wildcats erased a 14-point Vanderbilt lead to improve to 19-5 on the season.

Vanderbilt has come out firing from deep. Four made 3-pointers for the Commodores already.

Tyrese Maxey helped rally his team by putting up 25 points. The 6’3 freshman guard has averaged 13.9 points this season. While Kentucky is sitting in first, they do not have a strong hold of the top spot.

The dagger by Darius Days! pic.twitter.com/Fw45Bc5TAr

LSU held on the top spot in the SEC for most of this season. They stayed undefeated in the conference until back-to-back losses to Vanderbilt and Auburn last week. The Tigers are still ranked 25 in the country, but their lead in the conference has gotten away from them.

A win against Missouri on Tuesday night allowed them to hang with Kentucky. However, if Auburn wins on Wednesday, there will be a three-way tie at the top. Of those three, LSU seems least likely to hang on.

Auburn is currently ranked ahead of LSU and Kentucky at 11. The difference is the Tigers are 21-2 on the season and have yet to lose at home. They also handed Kentucky a loss a few weeks back. Auburn is also coming off an OT win over LSU.

The Tigers have another SEC matchup on Wednesday against Alabama. Another conference win would match Kentucky and LSU.

How the rest of the SEC played out

While the teams above are highly respected around the country, and rightfully so, the SEC has plenty of teams trying to prove themselves. Several games on Tuesday night allowed for them to make a statement.

The Vols defeated the Razorbacks 82-61 in and is in seventh in the conference, while Arkansas is 10th.

Vanderbilt has been struggling for most of this season and it was no surprise when Kentucky handed them a 78-64 loss. They are 14th in the conference.

Missouri may be in the 12th in SEC, but they put up a fight against second place LSU. They fell short 78-82.

South Carolina has a lot to play for at this point. The Gamecocks are fifth in the SEC.

Auburn is third in the SEC only because their two losses have come from conference foes. This game can shake up the rankings in the top three, while Alabama looks to improve their eighth place standing.

The fourth place Gators are not playing great basketball right now. There is still time to turn things around and a win over the ninth place Aggies would help.