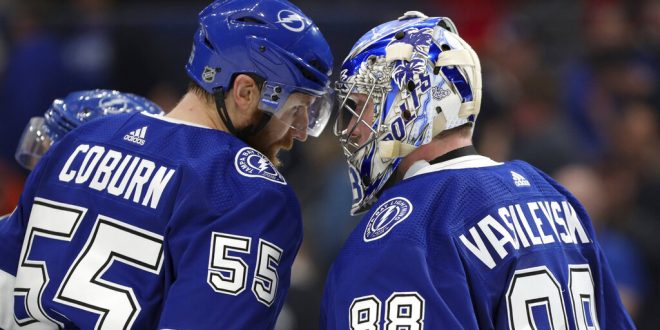 Tampa Bay Lightning's Braydon Coburn and Andrei Vasilevskiy, of Russia, celebrate at the end of the team's 6-3 win over the Calgary Flames in an NHL hockey game Tuesday, Feb. 12, 2019, in Tampa, Fla. (AP Photo/Mike Carlson)

Two road games in two days proved to be no match for the Tampa Bay Lightning.

Tampa Bay was able to hold on for two days in a row and pull out wins in overtime. The Lightning extended their win streak to eight games on Tuesday night when they came up with the 2-1 overtime win against the Pittsburgh Penguins. Their streak is now the NHL’s longest active winning streak.

On Monday night, the Lighting had won another 2-1 dramatic overtime matchup against the Columbus Blue Jackets.

Pittsburgh held control during the third period, outshooting the Lightning 16-9. Andrei Vasilevskiy was on fire though saving 35 out of the 36 shots the Penguins attempted and held Pittsburgh scoreless in the third period to send the game into overtime.

About halfway through the overtime period, Yanni Gourde did something he hadn’t done in 36 games. He collected the cross-ice feed from Brayden Point and shot the puck right over the right arm of Matt Murray, the Pittsburgh goaltender. That goal gave Tampa Bay their 20th win in their last 23 games.

Despite a Lightning win, Tampa Bay may be shorthanded moving forward after a hard bite from the injury bug.

Before their game against Pittsburgh, Tampa Bay was already down one of their captains and second-leading scorer, Steven Stamkos, with a lower-body injury that sidelined him from Monday’s game against the Blue Jackets as well. Defensemen Ryan McDonagh and Jan Rutta are also out.

In the final second of the first period on Tuesday, Anthony Cirelli blocked a shot from Evgeni Malkin. He skated to the locker room with the rest of the team but did not return for the second period.

In the final minutes of the second period, Nikita Kucherov came up limping after tangling with Jack Johnson behind the net. He skated to the bench and did not return to the game. Both players were said to have lower-body injuries.

The Lightning will now get a day off to head home before matching up with the Edmonton Oilers. The Oilers will be without star Connor McDavid, who is out two to three weeks with a quad injury. This game will take place tomorrow at 7 p.m. 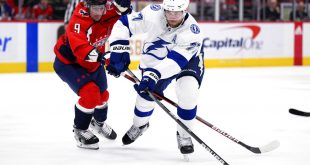