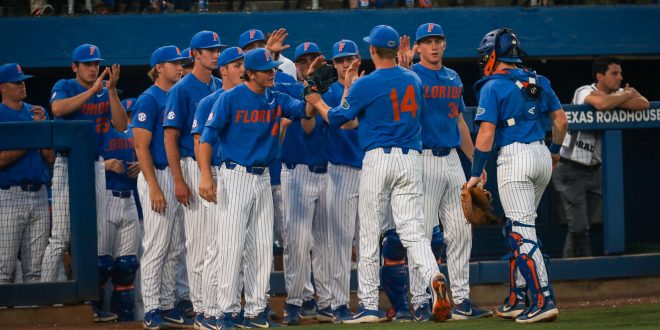 Van Der Weide played his 2017 season as a redshirt freshman. He graduated from USC Upstate as a redshirt junior. This allowed Van Der Weide to transfer to UF with eligibility status still under his belt. In all three seasons with the Spartans, Van Der Weide made 62 appearances, which included 14 starts. He posted a 4.76 ERA and 130 strikeouts over 153 innings pitched.

The Gators are ready. Is it Opening Night yet? #GoGators pic.twitter.com/Gq6b4osf9k

Coming from a small school, Van Der Weide never had the expectation to reach the College World Series in Omaha, Nebraska. Now, though, he is excited about the high stakes and expectations that come with being a Florida Gator. Van Der Weide said that one of the main reasons he chose to transfer to UF was because of the high-level the team is expected to play at each season.

After an early exit in the regional playoff last year, the Gators are looking for revenge. Even though transfers like Van Der Weide were not present for the disappointing finish last season, they carry the same weight on their chests. They know that Omaha is the end goal for this season even before the season officially begins.

A lingering question for Gator baseball this season is the pitching improvement. Last season did not see the stats and vigor that Gator pitching typically puts forward most seasons. Last year saw a young slate of pitchers for the Gators, including five freshmen who saw the mound in high-level games including Christian Scott and David Luethje.

This season, these freshmen enter their second-year with more experience and further developed arms. That combined with the return of weekend starters Tommy Mace and Jack Leftwich and upperclassmen transfers like Van Der Weide, pitching is expected to improve. Van Der Weide said that the most important thing for the young pitchers to remember is to stay calm.

Much like Gator baseball fans, Van Der Weide said that the team is ready for this season to finally begin.

Friday’s game will mark the final Opening Day at McKethan Stadium. The game will be the first of the three-game weekend series against Marshall and will begin at 6:30 p.m.