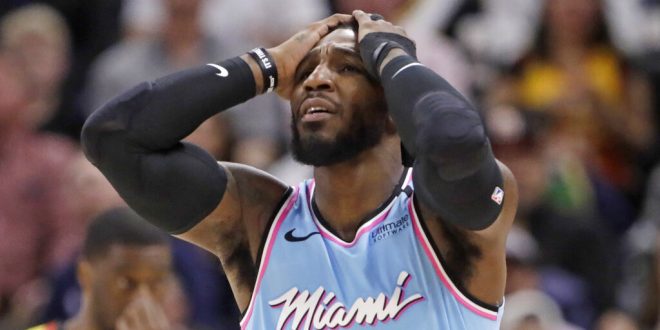 Miami Heat forward Jae Crowder (99) reacts after committing a foul against the Utah Jazz in the second half of an NBA basketball game Wednesday, Feb. 12, 2020, in Salt Lake City. (AP Photo/Rick Bowmer)

The Miami Heat ended their road trip in disappointing fashion with a 116-101 loss to the Utah Jazz last night. With the loss, Miami fell to 1-4 on its west-coast swing.

The Heat went into halftime with a five-point edge. An 8-0 run in the second quarter helped the Heat establish their early lead.

Jimmy Butler led the Heat in scoring with 25 points. His effort fell short of leading Miami to a win.

Utah did not take long to start its comeback. A Donovan Mitchell layup initially tied the game for the Jazz with 5:47 left in the third quarter.

Several spectacular individual performances led to the Jazz outscoring the Heat 69-49 in the second half.

Mitchell churned out a solid performance on offense, leading the Jazz with 26 points and hitting four threes. Bojan Bogdanovic added 22 points. The two Jazz stars hit clutch shots to help the Jazz take the lead in the second half.

Rudy Gobert came up big with a double-double and 20 rebounds. Gobert drove home a right-handed jam on an alley-oop from Joe Ingles to seal the game for Utah.

Jordan Clarkson contributed off the bench with his third straight game of at least 20 points. With three minutes left in the third quarter, Clarkson drilled a key three from the left wing to give the Jazz a 73-69 lead.

The Heat failed to recover.

Clarkson made four of six tries from three, sparking the Jazz late.

Duncan Robinson turned in an electric outing for Miami. All of his 18 points came on three-pointers.

He became the first player in franchise history to hit five or more triples in four straight games.

Robinson converted in clutch situations as well. He drained two fourth-quarter threes to keep it a one-score game for the Heat before the Jazz pulled away.

A much-needed break for the Heat

For the Heat, the All-Star Break comes at a perfect time. Miami (35-19) goes into the break having lost four of its last five games. The Heat travel to Atlanta for their next game on Feb. 20.

For the Jazz, the timing is less fortunate. Utah (36-18) ripped off a four-game win streak, including wins against Portland and Houston. The Jazz host the Spurs on Feb. 21.