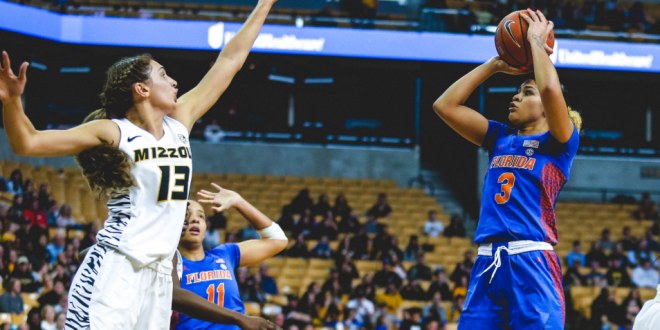 The Gator women’s basketball team got its fifth conference win after defeating Missouri 74-67 on Sunday. Florida is now 14-11 and 5-7 in conference play.

The Gators now have their most wins in conference play in the last four years. They also have the most SEC road wins in the last three seasons with three. And with 14 total wins, the Gators have also surpassed its winning total from the last two seasons.

This victory over the Tigers was historic as the Gators had never won against Missouri on the road. The Gators connected for 12 buckets from behind the arc, fueling their victory and recording a new season-high on the road.

Florida was able to out rebound the Tigers 40-30 and its bench was able to outscore Missouri’s 29-14.  With the SEC Tournament approaching, this win over Missouri was key as the Gators look to improve their seeding.

The Gators saw freshman and sophomores combine for 54 points and Florida now leads the SEC in games played by underclassmen.  They will try to get their sixth SEC win when they travel to face Alabama on Thursday.

With the victory also came a new career-high for freshman guard Brylee Bartram. She beat her previous record of 3 three-pointers made in a single game by recording six. These three-pointers helped her score 18 points, her new best.

Also leading in scoring was freshman guard Lavender Briggs who also had 18 points. This is the 13th time the freshman standout has scored 15 points or more this season.

Joining them in the double digits was red shirt senior forward Zada Williams. She scored 15 points and added 12 rebounds, recording her sixth double-double this season. The Florida native has gotten three double-doubles in the last four games.

This game featured three lead changes, but the Gators were still able to lead for the most part, keeping their lead for 37 minutes.

The first quarter was kept close as the Gators were only leading by four points with a 19-15 score. In this quarter, the Gators were able to get a 13-0 run but Missouri quickly responded with an 8-0 run of their own.

Missouri opened the second quarter with another successful 11-0 run, snatching the lead from the Gators. After that, the Gators responded with back-to-back three-pointers, taking back the lead.  Red shirt junior Kiki Smith knocked down another trey, forcing a Tiger timeout with 5:05 left in the half.

The first half ended with Florida still in the lead with a 36-29 score. Bartram led her team in scoring going into halftime with 12 points.

The Tigers suffered a three-minute scoreless drought early in the third quarter and the pace eventually slowed down as those three minutes turned into five. Florida’s lead grew as they led Missouri 54-38 going into the fourth quarter.

Early in the fourth, the Gators were able to extend their lead even more by achieving a 19-point lead. Missouri showed no signs of giving up after trimming the lead to only 10 with 1:28 left in the game. They also cut the lead to single digits with under a minute to play but Florida kept a steady pace to avoid Missouri’s comeback.

Florida head coach Cam Newbauer said that even though his team didn’t play as well as he wanted late in the game, he is still proud of their winning performance.

“The team continues to come together and play as one and I’m very happy with the fight and focus we showed. I didn’t like how we closed it out…. I think we had some careless turnovers there but I’m fully confident we will learn from it.”

Camila is a senior at the University of Florida, who served as a beat writer for the women's basketball team from 2019 until the 2021 season. She was also a beat writer for the Gators football team during the 2020 season. Camila is also WUFT's news director as well as a sports reporter/anchor.
@CamilaMaffuz
Previous Gators run-rule SLU, FAMU hangs around
Next Florida Baseball Faces Jacksonville University in Midweek Matchups