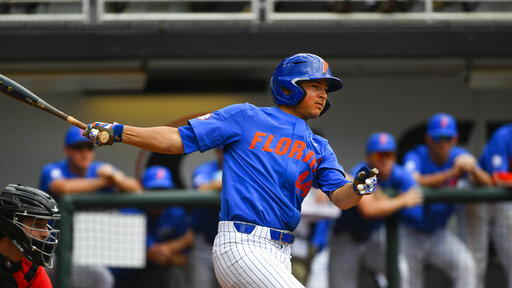 Florida Gators baseball returns to the diamond on Tuesday night for their first midweek matchup of the season.

The Gators will take the road Tuesday night against Jacksonville University. On Wednesday night, the Gators return home to host JU in McKethan Stadium.

A series sweep to kick off the season is a positive sign for this promising Florida baseball team. However, what is most impressive for this Florida team is their abilities at the plate.

The Florida lineup featured 13 batters with at least one hit against Marshall. Additionally, six Gators enter the midweek matchup with one or more home runs.

The talent at the plate extends beyond just upperclassmen. Sophomores Cory Acton, Jud Fabian and Kris Armstrong had impressive outings at the place against Marshall.

Early season midweek games can serve as a time for head coach Kevin O’Sullivan to experiment with the lineup.

Experimenting on the Mound

Tommy Mace and Jack Leftwich made a strong case for their respective Friday and Saturday night starts against Marshall. However, Sunday brought a variety of young Florida pitchers to the mound.

Freshman left-hander Hunter Barco is expected to get the start on the mound for the Gators on Tuesday.

The midweek matchups against JU will allow head coach Kevin O’Sullivan to get his freshman and sophomore pitchers into the game.

A Look at Jacksonville

Jacksonville University looks to bounce back from their opening weekend series loss against West Virginia in their Tuesday matchup against Florida.

The Dolphins dropped game one of their series against West Virginia before rallying back in game two to tie the series 1-1. On Sunday, Jacksonville fell just shy of a game three victory, falling 1-2.

At the plate, the Dolphins are led by catcher Anthony George who enters the game with a .417 batting average. Furthermore, George recorded five hits and one RBI against West Virginia.

Infielder Christian Coipel came up big for Jacksonville in their 4-3 game two victory against the Mountaineers. Coipel’s two-run home run in the eighth inning secured the Dolphins win.

He scored a run, and drove in the game-winning two with a monster home run to right.