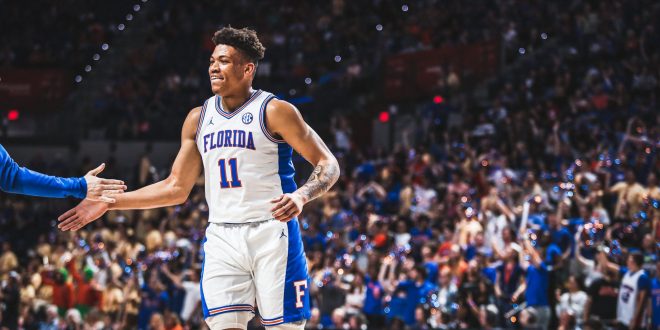 The Florida Gators men’s basketball team defeated the Arkansas Razorbacks 73-59 on Tuesday. In a wild ride of runs between the teams, the Gators held on to pick up their fifth win in February.

could it be one of THOSE games for Keyontae Johnson… #Gators

It was one of those games for Gators sophomore Keyontae Johnson. He scored a career-high 24 points in the Gators’ win and led all scorers. Johnson has scored in double-digits in nine straight games and in 14 of the last 16.

With his performance against Arkansas, Keyontae Johnson becomes just the fourth Gator player since 1996 to score 24 points on 7 or fewer field goals. Johnson made 15 free throws on 17 attempts to pad his scoring total.

After the game, Florida head coach Mike White had praise for his sophomore forward. According to White, Johnson’s improved three-point shooting is a reason why Johnson got to the free-throw line so much.

Andrew Nembhard finished with 17 points, seven rebounds and four assists. His play down the stretch of the second-half helped the Gators seal the game and never lose their lead. Of Nembhard’s 17 points, 12 came in the last 13 minutes of the game.

Blackshear Jr. would not sub into the game until the start of the second half. During Blackshear Jr.’s first-half absence, Keyontae Johnson and Noah Lock would carry the load combining for 17 points until he subbed back in.

This two-big rotation with Jitoboh and Payne continued into the second half as Blackshear Jr. picked up a third foul within the first two minutes. He would check back in with 14:34 left in the second half. Blackshear Jr. totaled four fouls on the game, which influenced his playing time during key parts of the game.

A game of runs

In the first half, Florida attacked the nation’s top-ranked perimeter defense with five made threes. Noah Locke contributed three made three-point shots while Johnson and Mann each added one. This would help propel the Gators to an early 21-7 lead. Florida finished the game shooting 37.5% from three-point range against a team that allows only 25% on the season.

Florida’s lead would not last, as Arkansas stormed back behind a 16-4 run to close out the half. Arkansas’ Jones, who remained mostly quiet from the floor prior to the run, ended the half with 8 points and helped surge the team back into the game.

The surge continued into the second half, as Arkansas’ Jones scored 10 points in the first ten minutes. He would finish with 21 points, leading the Razorbacks in scoring.

According to coach White, the Gators’ resilience in the second half showed a massive improvement from his squad.

Fouls came in abundance for the Gators and the Razorbacks. Through the first 24 minutes of the game, the officials gave out 24 fouls. In total, there were 40 total through 40 minutes of play.

One of those fouls was a technical foul on Noah Locke after shoving Arkansas’ Adrio Bailey when Bailey listened into a Florida huddle.

This play is under review…. pic.twitter.com/NTeDcdeDzy

After the game, Johnson commented on the incident. According to him, Florida was trying to, “protect their house” as Bailey tried to enter their huddle.

After the game, coach White took the blame for the foul. According to him, he has told his guys to be more aware of players trying to enter their huddle.

Arkansas will look to end their five-game skid against Missouri on Feb. 22.