But tennis and Gator fans will have to wait another eight days before watching Florida on the court again.

On Feb. 28, the Gators will commence conference play.

Bryan Shelton’s team currently finds itself just outside the top-five of ITA’s latest national rankings. The Gators sat atop the national podium for a few months as recently as Feb. 14. However, a disappointing loss to UNC at the National Team Indoor Championships back on Valentine’s day halted their momentum.

At that point, Shelton and his group were victors of eight consecutive matches.

Twelve of Florida’s next 13 games will come against SEC teams. First up is a home matchup with the Alabama Crimson Tide.

In February alone, it collected wins over No. 9 Columbia and No. 21 Florida State.

Shelton spoke about the importance of competition after the win against Columbia.

“Our guys competed really hard today against a very good Columbia team,” said coach Shelton in a release. “We played with great energy and attacked relentlessly… Every match here is a quality match, which will help us get better.”

The SEC will come with its own set of challenges as well.

Alabama (7-2) isn’t ranked inside ITA’s top-25, yet they did receive votes to be included. The Tide also has a match scheduled for Feb. 21 against No. 21 Texas Tech. A highly competitive match exactly one week apart from Alabama’s match with Florida may bode well depending on the result.

The Gator’s remaining 13 matches of the regular season will undoubtedly challenge them. Four of those teams are currently ranked within the country’s top-25.

Looking ahead, it’s important to note some of the recent individual performances from players on Shelton’s squad.

Florida is primed to make a deep run into this season’s SEC tournament. Nevertheless, Florida’s performances in conference play will be a solid indicator for Shelton and his coaching staff.

Sports media and management student at the University of Florida. Content creator for ESPN 98.1 FM/ 850 AM WRUF.
@TheEdgarChavero
Previous Ole Miss Looks to Bounce Back Against Alabama on Saturday
Next LSU Men’s Basketball Heads to South Carolina on Saturday 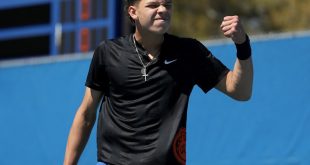