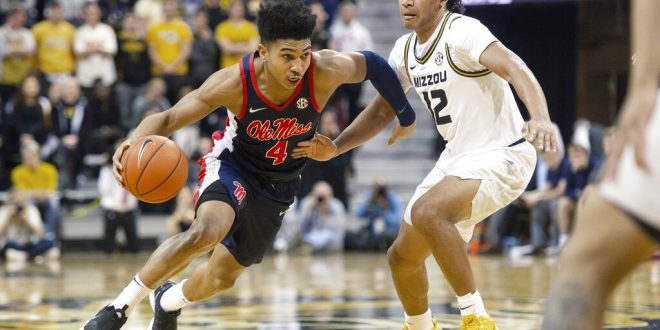 The Ole Miss Rebels men’s basketball team welcome the Alabama Crimson Tide in an SEC matchup on Saturday, February 22. Tip-off is slated for 8:30 ET p.m. in Oxford, Mississippi at The Pavilion at Ole Miss stadium. Both teams are coming off a loss, however, this is the first meeting between the two teams this season. The Crimson Tide come in at 14-12 overall and 6-7 in SEC play, while the Rebels are 13-13 and 4-9.

Allowing a late 12-0 run in the final minutes of the game, the Crimson Tide fell short to the Aggies 74-68 on February 19. Consistency from outside remains an issue for the Crimson Tide. The Tide have shot less than 40% from behind the 3-point line in four straight games. Alabama is now 51-of-138 from beyond the arc over its last 3 games alone.

The plan to bounce back against Ole Miss relies on their leaders and aggressive decision making. Kira Lewis Jr. is the Tide’s leading scorer averaging 17.5 points a game. John Petty Jr. follows with 15 and Jaden Shackelford with 14.7 points. Shackelford looks to extend his streak to four games with 20-plus points this Saturday against the Rebels.

With a 10-4 home record, The Rebels are hoping to hold off the Crimson Tide as they try to bounce back from two consecutive losses to SEC opponents. Breein Tyree is the leading scorer of the Rebels and in Southeastern Conference play averaging 20.3 points per game. Tyree passed Ole Miss Athletics Director Keith Carter (1,682) for seventh on Ole Miss all-time scoring list. In terms of statistical leaders, next comes Devontae Shuler at 11.5 points per game. Shuler also leads the Rebels in assists (3.5) and steals (1.8).

@@JohnSaliba14
Previous Kris Bryant wants to stay with Cubs
Next What to Watch For: Gator Tennis to Begin SEC Play for 2020