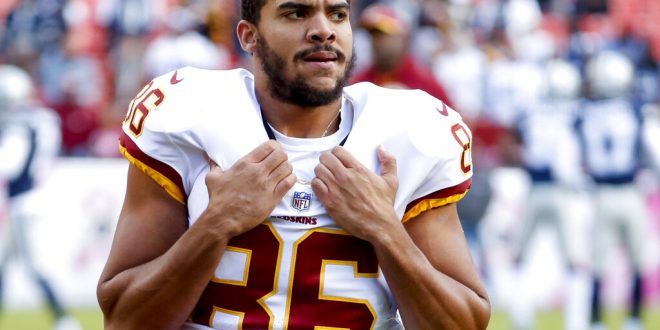 The injury-prone veteran looks to continue his NFL career with a new team in 2020.

The Redskins praised Reed for his on-field performance as one of the best players in history to play for the franchise. The tight end played for seven years with the Redskins.

One of the best in franchise history. Thank you, Jordan! pic.twitter.com/VfjoW9WLpq

Jordan Reed has since been removed from the game and is in the concussion protocol.

This is a nightmare scenario for the #Redskins, given Reed's history with concussions.

This kind of hit doesn't belong in the NFL. https://t.co/D6jnNIZEuh

Reed’s NFL production hindered by a history of injuries

The 6-foot-2 tight end recorded a breakout season in 2015 with 87 receptions for 952 yards, 10.9 yards per catch and 11 touchdowns, according to ESPN. He caught 76% of passes that targeted him that season.

Aside from the 2015 season, injuries have plagued Reed’s production. He has missed at least one game due to injury in each of his seven NFL seasons.

Before 2015, Reed had suffered four concussions in the past five seasons, including his time with the Gators, according to Ethan Cadeaux. In 2014, the tight end pulled his hamstring in September and re-injured it in November.

He injured his ankle against the Eagles in October 2015 and then recorded his fifth concussion upon return to the game. In 2016, he had another concussion and separated his shoulder.

Reed had chest and hamstring injuries in 2017, causing him to miss a total of 10 games that season. In 2018, he strained his toe and missed three games.

Reed also had a scary hit against the Cowboys in 2018 that did not draw a flag or result in a concussion.

Jordan Reed has every right to be furious, clear hit to the helmet and it goes uncalled. Has to be frustrating, especially for a guy with a history of concussions. pic.twitter.com/v6EBmS2qNW

He missed the entire 2019 season because of the concussion in the preseason.

Some speculate if the Patriots should pick up Reed

Bill Belichick and the New England Patriots are known for their signings of players that have under-produced elsewhere. The Patriots also struggled at the tight end position in 2019.

USA Today Patriots Wire reporter Henry McKenna thinks the Patriots should give Reed a look as he doesn’t see it hurting them, while Zach Cox from NESN sees the move as too much of a risk for the needs the Patriots must fill this off-season.

NBC Sports contributed to this report.