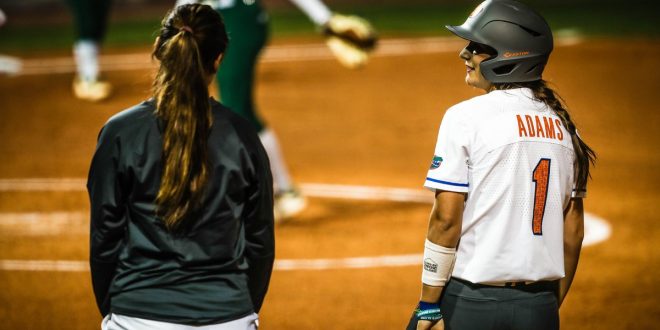 Florida softball’s visit out west wasn’t supposed to be easy. And it hasn’t been.

However, in day one of action in the Mary Nutter Collegiate Classic, the Gators went 2-0. Both wins came over Wildcats — one group hailing from Arizona, the other Northwestern.

In the Gators’ opening game of the classic, Tim Walton and his team had to battle jet-lag during their 12:30 local-time start. Back home in Gainesville, fans tuned into the game at 3:30.

Defensively, Walton threw two of his freshmen into the fire. Lefty Rylee Trlicek would start in the circle, while Julia Cottrill kneeled behind the plate on the receiving end of the pitches.

Offensively, per usual, junior Hannah Adams was set to lead off.

Adams’ first hit was good for a base. Her second, which came late in the bottom of the second inning, fell just shy of beyond the fence. It was almost as if she was warming up and gauging where her next shot needed to go.

Meanwhile, sophomore third baseman Charla Echols added to her storied start as a Gator with a moon-shot that sailed towards the mountainous terrain that surrounds Palm Springs, California. And with her home run, the Gators drew first blood against the Wildcats.

In the top of the fifth inning, Arizona stormed back with a series of base hits to score Alyssa Palomino and knot things up at one apiece.

By the bottom of the fifth, Hannah Adams was back to the bag and ready to lead off. This time, she knew exactly what she needed to do to get the ball over the fence. And she did it.

This time, there was no question. Adams hacked at a pitch and roped it down the right foul line and over the fence. The Gators were back on top.

At the hand of a pair of crippling defensive errors from the Gators’ field, Arizona was able to come trotting back into the game. But not for long. By the end of the sixth inning, the Gators were back to maintaining a one-run lead after a single up the middle from Kendyl Lindman scored E.C. Taylor, who was pinch running for Julia Cottrill.

Back in the circle, Trlicek didn’t let the pressure of facing the fifth-best team in the country faze her. Nor was she intimidated by pitching to the best hitter in the country.

Arizona’s Jessie Harper, who led the NCAA in home runs last season with 29, is once again crushing pitches out of the yard. Officially, Harper has already sent five flying this season — not including the two she launched in the Wildcats’ exhibition against Team USA.

Twice in the constest, with a runner in scoring position, Walton and Trlicek opted to intentionally walk the slugger. But in the top of the seventh with the Gators white-knuckling a 3-2 lead and Harper coming to bat, intentionally walking her wasn’t in question.

Trlicek quickly got down in the count after hurling back-to-back balls. But the pitches that followed, all three of them, went for strikes. And Harper was sent back to her dugout.

The Wildcats would pop-out and Trlicek would toss three-straight strikes to Marissa Schuld to secure the win and knock-off the fifth-ranked Wildcats.

In contrast to the Gators opener, game two proved to be a pitching dual as Florida and Northwestern found themselves in a scoreless stalemate as they entered the sixth inning.

Up to that point, Florida’s Natalie Lugo had plucked away at batter after batter. Through 4.2 innings of action, the junior racked up six strikeouts against 22 faced batters. Of her 92 total pitches, 55 went for the call in her favor.

In the top of the fifth, Northwestern’s Skyler Shellmyer reeled a hit right back towards Lugo. Shellmyer’s crack made contact with the inside of Lugo’s knee. And though Lugo seemed uninjured, she was ultimately replaced by Trlicek who finished the game and was credited with a save.

Offensively, the Gators posted one of their worst games this season. As a team, Florida’s lineup batted an average of .250 after finding their way to just six hits on 24 at-bats. Seven members of Florida’s offense finished game two hit-less.

However, those that did tally hits made them count.

It wasn’t until the fourth inning that Charla Echols gave the Gators their first hit. Freshman Baylee Goddard would follow with a single of her own. Though, both Echols and Goddard would be left stranded after Julia Cottrill flew out to third base.

In the top of the sixth inning, the scoreboard was finally put to use after Sammy Stanley scored from second after a base hit through the right side from Sydney Supple.

In Florida’s half of the sixth inning, Kendyl Lindaman sent a ball flying out of the park to even the score. With her solo-shot, Lindaman continues on a 14-game hit streak.

The Wildcats added the pressure to the Gators in the top of the seventh after a Morgan Newport single scored Jordyn Rudd and put Northwestern back on top 2-1.

The Gators, who had just three outs to give, needed one run to tie or two runs to walk off with their second win of the day. They chose the latter.

After Cheyenne Lindsey singled on a bunt and Sophia Reynoso took a free base after being hit by a Sydney Supple pitch, the Gators had the winning run on first base. Supple was yanked from the circle and the Wildcats looked to Kenna Wilkey to put the Gators away.

Florida’s Hannah Sipos put down a sac-bunt to advance the runners before Hannah Adams came to the plate.

With the stroke of her bat, Adams sent a ball out to shallow right field where it fell. Meanwhile, Lindsey sped to score the tying run and Reynoso rounded third and beat the throw home.

Although the Gators’ visit to California has been highlighted by two big wins, it’s far from over.

On Saturday afternoon, Florida will square off against #16 Arizona State at 5:30 ET and defending WCWS Champions #1 UCLA at 8:30 ET.

Ainslie is a journalism major at the University of Florida where she specializes in Sports Media. Her main passion is college football as it was a huge part of her childhood. Ainslie serves as a current correspondent for the Ocala Star-Banner, a newspaper for the Ocala, Florida area. She currently covers Marion County high school sports.
Previous Former Gators tight end Jordan Reed released from Redskins
Next Gator Baseball Claims Game One Against #1 Miami