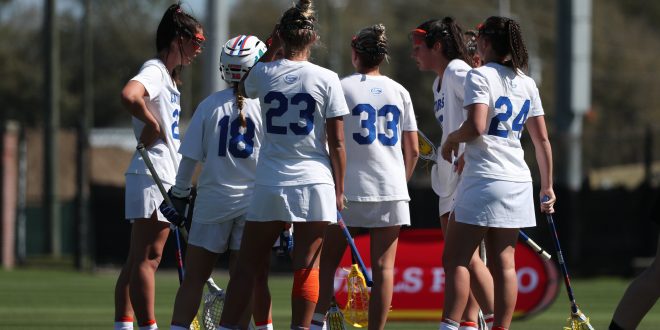 The No. 12 Loyola Greyhound lacrosse team came to Gainesville and stunned No. 4 Florida Gators 17-6.

After soaring 10 spots in the rankings following their win over then No. 1 Maryland, the Gators were expected to make quick work of the Greyhounds.

However, Loyola came out blazing and shut down the Gator offense. Florida never led throughout the game.

Florida dropped to 6-2 all-time against the Greyhounds.

Grace Haus scored her 100th goal as a Gator, with her second goal of the game.

Shannon Kavanagh recorded at least one point, extending her streak to 22 games, the fourth-longest streak in program history.

Florida controlled the draw, with 13 draw controls on the day. Kavanagh won nine draw controls in the game, while Brianna Harris notched two draws of her own.

Sarah Reznick recorded eight saves, pushing her to 33 saves on the year which is the most for any Gator freshman in their first three appearances.

Loyola got to work early and scored the first two goals of the game. Kavanagh scored her 13th goal of the season though to bring the Gators back within one.

The Greyhounds responded back with two unanswered goals to take the 4-1 lead. Haus scored her first goal of the season to bring the lead down to two, but Loyola’s offense was on fire and stretched their lead to five with 11 minutes left in the first.

Kavanagh posted her second goal of the game, quickly followed by another from Haus on a behind-the-back free position goal to put Florida within three. Loyola responded with a 3-0 run to take a 10-4 lead going into halftime.

Out of the break, the Greyhounds came out with six unanswered goals. Florida did not respond until nine minutes left in the second half when Harris scored her first goal of the game, then followed with the final goal of the game.

The Gators women’s lacrosse team is back in action on Wednesday as the team travels to Kennesaw State. Opening draw is set for 11 a.m. against the Owls.