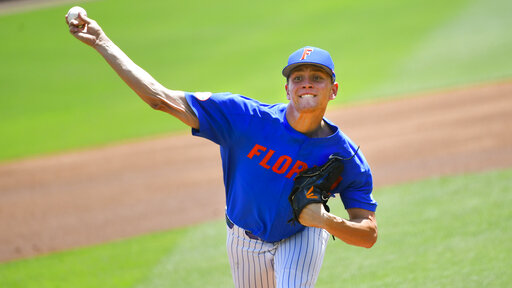 Right-hander Jack Leftwich took the mound for the Gators in Game 2 against the Hurricanes.

After a scoreless first inning, the Hurricanes jumped out to a quick 1-0 lead in the bottom of the second inning. A home run from infielder Alex Toral gave Miami the lead.

In the top of the fourth, Florida evened the score 1-1. Cory Acton opened up the inning with a double to right field, directly followed by a single from Jacob Young.

A sacrifice fly from Jordan Butler advanced Acton home for the Gators first run of the night.

In the bottom of the seventh, Miami furthered their lead, 2-1, with an RBI single from Raymond Gil.

Florida entered into its final at bat in the top of the ninth down one.

Kris Armstrong started off the ninth inning with a single to left field. With two out, sophomore Jud Fabian tied the game, 2-2, with an RBI double.

The tenth inning proved to showcase the Florida offensive talent.

Kirby McMullen started the inning with a home run to give the Gators their first lead of the night, 3-2.

Then pitcher Ben Specht got a chance to hit and he delivered another Florida run with an RBI single to the right side. Rivera scored the final run of the night for Florida after a throwing error.

Miami tacked on two runs in the bottom of the tenth bringing the final score to 7-4.

Florida returns to the field Sunday afternoon for Game 3 of their series against Miami. You can listen to live coverage of Sunday’s match up on 103.7.