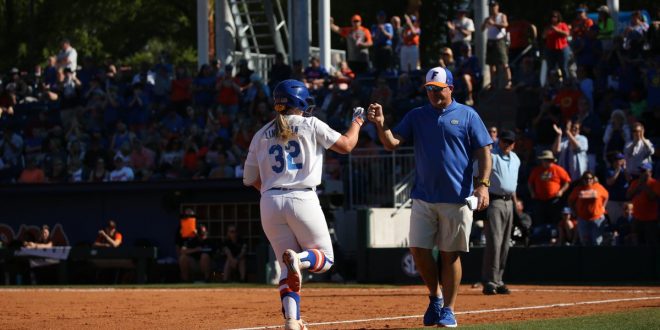 After Florida was downed by the No. 1-ranked UCLA Bruins in extra innings on Saturday, Tim Walton and the Gators could have done one of two things: fall into a trap-game, or look to close out their slate in the Mary Nutter Invitational in winning fashion.

The Gators chose the latter. Though, Nebraska didn’t go down without a fight.

Gators close out the Mary Nutter with a WIN over Nebraska‼️

In fact, the Cornhuskers drew first-blood in the opening inning. Nebraska’s Tristen Edwards opened the game with a base bit and later scored on a wild pitch from Natalie Lugo.

It wasn’t until the top of the third inning that Florida found their offense.

An RBI-single from Lindaman scored freshman Julia Cottrill to get the Gators on the board in Florida’s half of the third inning. Echols followed suit with a base hit to sore Jaimie Hoover, who got to base on a walk earlier in the inning.

Gripping on to a 2-1 lead, the Gators added three more runs to their lead with a fly-ball from Echols to score Hannah Adams, and a two-RBI base hit from Jordan Roberts to score Mia Buffano and Baylee Goddard.

However, the ‘Huskers may have been down, but they weren’t out.

Tristen Edwards struck again against Natalie Lugo. This time, with a two-run home run shot in the bottom of the sixth inning.

Katie Chronister entered the circle for the Gators to relieve Lugo of her pitching duties. Lugo, who found her sixth win of the season, finished with eight strikeouts.

Though Nebraska had a runner on the doorstep, Chronister and Florida’s field ended the sixth without further harm.

In the top of the seventh, Cottrill doubled to right-center field to score an insurance run in the form of fellow-freshman Baylee Goddard. Cottrill’s RBI-two-bagger was enough of a cushion to keep the ‘Huskers at bay.

T7 | Cottrill with another double! This one is to right-center and that'll bring home Goddard from first!

The No. 7-ranked Florida Gators improved to 16-2 on the season after a weekend in California in which they finished 4-1 – including three wins versus ranked opponents.

We start our 12-game homestand against No.11 Louisiana Friday, Feb. 28.#GoGators x #GatorsMarathonhttps://t.co/NEs1nHUw4M

Florida will return to action at Katie Seashole Pressly Stadium for a 12-game homestand. The Gators will face off against No. 11 Louisiana in a three-game series on Feb. 28-March 1.

Ainslie is a journalism major at the University of Florida where she specializes in Sports Media. Her main passion is college football as it was a huge part of her childhood. Ainslie serves as a current correspondent for the Ocala Star-Banner, a newspaper for the Ocala, Florida area. She currently covers Marion County high school sports.
Previous Florida Baseball Clinches Series Against No.1 Miami
Next Gator Baseball Sweeps Miami 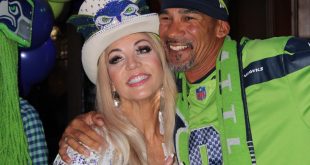