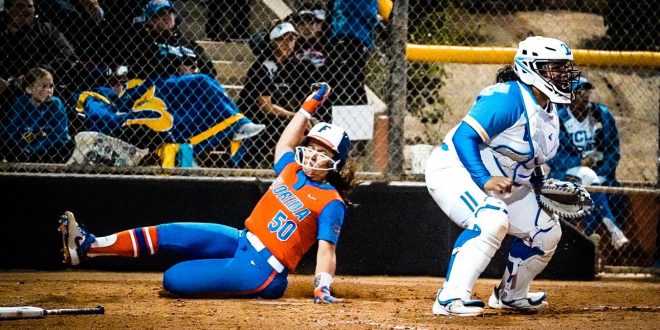 Prior to this tournament being played in California,the Florida softball team endured three straight losses to the UCLA Bruins. The fourth one turned out to be a heartbreaker.

A wild pitch bounced in the dirt, off the catcher’s glove and caromed off of the backstop in the bottom of the eighth inning. The result: a walk-off win for the Bruins.

Hanging tough with No. 1

Florida started the game strong. UCLA got on the board first, but the Gators answered with three runs in the top of the second.

First, Jordan Matthews singled in Baylee Goddard to tie the game. Jaimie Hoover gave the Gators a 2-1 lead with a single up the middle with the bases loaded. Then, with the bases still loaded, a pitch hit Kendyl Lindaman to extend the Gators’ lead to 3-1.

Goddard led off the third and delivered. Her solo blast answered another UCLA run to put the Gators up 4-2.

Defensive miscues haunted the Gators in the fourth. Julia Cottrill made a throwing error on a dropped third strike, which scored a run. Kelli Godin touched home for the tying run as the Bruins pulled off a successful first and third play.

The game remained tied at four through seven innings. Godin played hero in the top of the eighth. She threw out Cheyenne Lindsey at home after Lindaman lined out to left.

UCLA finished the comeback in the bottom of the inning. The wild pitch scored the winning run, and the Bruins stayed undefeated with a 5-4 victory.

Before the Gators took on UCLA, No. 16 Arizona State stood in the way. Florida’s Natalie Lugo and Arizona State’s Madison Preston engaged in a true pitcher’s duel.

Preston held the Gators hitless until the fourth inning. Florida’s first run came in the fifth, after Goddard wore a pitch with the bases loaded.

The Sun Devils answered in the bottom of the inning, knotting the game at one apiece. However, Florida roared back in the sixth. Hannah Adams singled in two runs after a throwing error by the center fielder. Lindaman capped off the inning with a single down the left-field line, scoring Adams.

Lugo re-entered the game and shut the door on the Sun Devils. The Gators walked away with a 4-1 victory.

Going 1-1 on Saturday, Florida (15-2) lost only its second game of the season, and first of the Mary Nutter Collegiate Classic. The Gators wrap up the invitational tomorrow against Nebraska (6-7). First pitch is set for 11:30 AM (ET).

@NevadaCullen
Previous Gator Basketball Falls to No. 10 Kentucky
Next Florida Baseball Clinches Series Against No.1 Miami