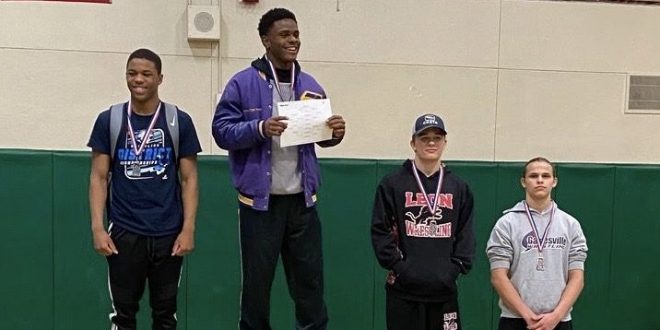 Recap of the District Championship

The Gainesville Hurricanes made their way to Lincoln High School on Saturday to compete in the FHSAA 2A D2 District Championship. Nicholas Hanson, the team’s 152 pounder, placed 4th, advancing him to the Regional Championship.

Nelson, Fernandez-Smith and Marshall were all one win away from making it to the 3rd/4th place match, which would have secured them a spot in the Regional Championship Feb. 28-29.

“Seeing those kids progress from the beginning of the year to the end, has really made me happy and excited for the years to come,” said Thomas Bujalski, assistant wrestling coach.

Bujalski said the wrestlers’ aggressiveness was there this weekend, but that they have to improve on defense. This week’s practices will be focused more toward that weakness.

Jee said he’s seen the growth in his wrestlers, and that he can only ask that they take the life lessons wrestling has given them and apply it to their lives.

Hanson was predicted to lose. He was seeded 5th in a seven-man bracket. Regional qualifiers are the top four.

Hanson’s first match was against Ethan Eudy from Leon High School. He lost in a 12-5 decision.

Round two brought a bye for Hanson, advancing him into the consolation semi-finals. Win and move onto Regionals, or lose and go home.

Hanson was up against Trevion Sermons, a freshman from Orange Park High School.

In the first period, he managed to take Sermons down once. Sermons chose bottom to start period two.

A minute and 13 seconds in, Sermons scored a reversal on Hanson. With less than a minute remaining in the second period, Sermons was called for stalling and the match was reset to neutral. Hanson received a point.

With a close score of 3-2, Hanson chose to start the third period on bottom. He immediately escaped, only to be taken down shortly after. The match was tied.

Hanson escaped once more but Sermons was able to secure one last takedown. The match was almost over. The score 6-5, Sermons.

“We were telling Nick ‘you gotta go! We need shots!'” Bujalski said. “The more he shot, the more he pushed the pace.”

With seconds remaining before the match ended, Sermons was given his second stall call. A penalty point was rewarded to Hanson, tying the match. They were headed to overtime.

Hanson chose bottom. He reversed Sermons and was able to rack up two nearfall points. Before time ran out, Sermons scored a reversal. Double-overtime.

Hanson was now up by two points. He could afford to give up an escape point, but it was risky.

“All I was screaming was wrestle zero,” Bujalski said. “Staying low, being down block ready, moving around the mat, keeping him away from us.”

Nicholas Hanson had just punched his ticket to Regionals.

Hanson said that his goal this season is to make it to the state tournament and that he already knocked the first step out of the way.

“I’m a big believer that you win your medal, your trophy, or whatever award during practice,” Jee said. “When you go to competitions you just go to pick it up.”

Jee said that he’s excited for Hanson and ready to watch him wrestle again, but that he never expected anything less.

The FHSAA 2A R1 Regional Championship will be held at Chiles High School on Friday and Saturday.