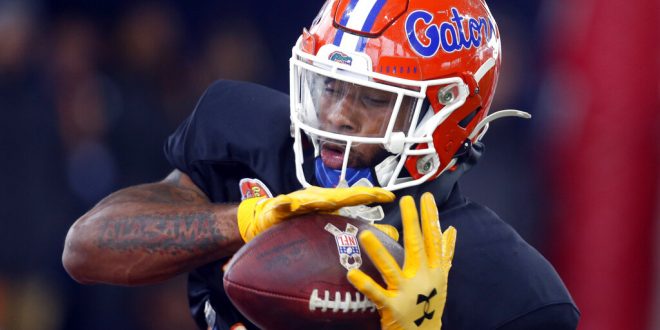 Eight former Gators will be making the trip up to Lucas Oil Stadium in Indianapolis this week to participate in the NFL combine.

Running back Lamichael Perine, wide receivers Tyrie Cleveland, Van Jefferson and Freddie Swain received invites from the offensive side of the ball. On the defensive side, the invites include defensive lineman Jonathan Greenard, Jabari Zuniga and cornerback C.J. Henderson. Punter Tommy Townsend received an invite for special teams.

Former Gators were able to shine at the Senior Bowl last month. Van Jefferson and Lamichael Perine were both honored as practice player of the week for the south team. Perine then added to his draft stock by being named the South team player of the game.

Florida receiver Van Jefferson shows off his route running ability at South Senior bowl practice. #Jaguars have a need with depth at the position pic.twitter.com/yYg9QkJLGp

What to Expect in Indianapolis

The top prospect out of Gainesville has to be Henderson. The junior has elite coverage skills and projects to be one of the top cornerbacks taken in April, along with Jeff Okudah from Ohio State and Kristian Fulton from LSU.

Having said that, the draft is not a science. Henderson may fall on some teams draft boards because of his perceived unwillingness to come up and tackle. Those same concerns pushed former LSU cornerback Greedy Williams out of the first round last year. Pro Football Focus had Williams as their No. 9 prospect before the draft, but he fell to the Browns in the middle of the second round.

Florida defensive coordinator Todd Grantham had high praise for Henderson during the season while also addressing his tackling woes.

After Henderson, a few Gators are all grouped close together as projected third and fourth round picks.

Jon Greenard is a player who helped himself immensely during the season with a monster year. The Louisville transfer reunited with his old coach Todd Grantham . The defensive end finished his 2019 campaign recording 10 sacks, 16 tackles for loss, 46 quarterback pressures and a 91.1 run-stopping grade by PFF. His ability to pressure the quarterback will have NFL front offices interested. However, his ability to stop the run can separate him from the other pass-rushers.

If Greenard can show off his athleticism in Indianapolis, don’t be surprised if he sneaks into the second round.

Perine and the Receivers

After their incredible showings at the Senior Bowl last month, Perine and Jefferson have the opportunity to make themselves some more money this weekend. In an unbelievably deep wide receiver class, Jefferson has played his way into a projected third-round pick. Jefferson has always had the reputation as a smooth route runner that projects as a possession receiver. If he can raise some eyebrows in some other areas, he may sneak into the second round as well.

Perine is a victim of the changing NFL, where traditional running backs have become devalued in favor of receiving backs. However, playing at Florida has given Perine an advantage over other players. When Dan Mullen came to UF, he transformed Florida into a pass-heavy team, which forced Perine to transform into a do-it-all back.

Last year, Perine had a career-high 40 receptions while also improving as a pass blocker. Projected as a fifth-round pick, there doesn’t seem to be a lot of opportunity for him to move up the board unless he blows scouts away in his testing.