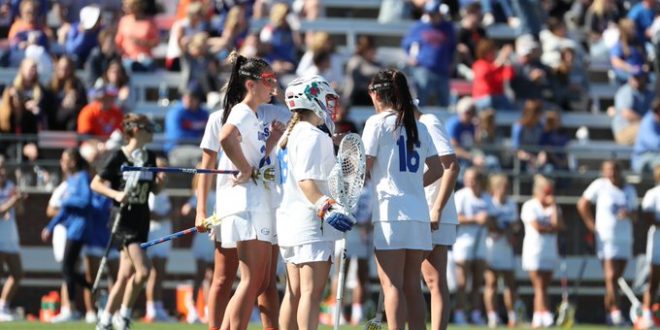 The No. 8 Florida Gator lacrosse team will have an early opening draw tomorrow morning at Kennesaw State.

This will be the first time that these two teams have ever met, but Florida has a 12-0 record against schools in the ASun Conference.

Florida is looking to bounce back with a win after falling to now No. 5 Loyola. This matchup will be the Gator’s first unranked opponent that they have faced this season.

Going into tomorrow’s matchup, Florida lacrosse has the edge in all statistical categories except one. The Gators have the advantage in goals, assists, draw controls, groundballs, caused turnovers, shots, shots on goal, saves and saves percentage.

Kennesaw State holds the edge in shooting percentage though.

The Owls sit at 1-1 this season. Kennesaw State dropped their season opener to Vanderbilt 21-11 but then went on to dominate Gardner-Webb 17-8.

Two sisters lead the Owls offense in Siena and Marissa Gore, who have combined for 17 points on the year. Siena Gore also leads the team in draw control with 13 in their first two games.

In the goal, Alex Bunn is averaging 10 saves a game, but it allowing 14 goals per game.

After a big win, the Gators fell hard to now No. 5 Loyola. Three Gators each tallied two goals apiece, but their rally came too little too late for the comeback.

Florida caused five turnovers vs the Greyhounds, led by two from Becky Browndorf, which tied her career-high.

Sarah Reznick recorded eight saves in the cage. This pushed her to 33 saves on the year which is the most for any Gator freshman in their first three appearances.

Previous Kobe, Gigi Bryant eulogized on 2/24
Next Joe Maddon returns to his roots