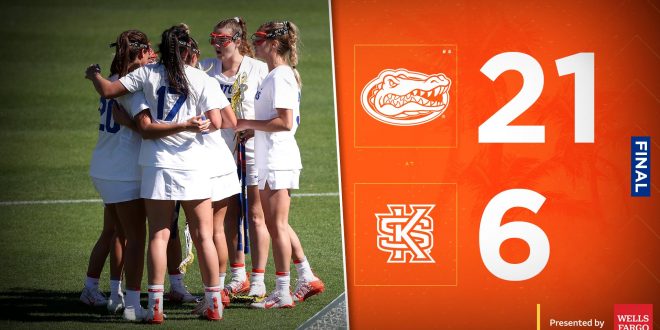 After dropping hard to Loyola, the Florida Gator Lacrosse team rebounded in a big way. The Gators went on the road to Kennesaw State and recorded a huge 21-6 victory against the Owls.

~first collegiate goal for @MortonLexie is a D I M E~

Florida took 35 shots during the game, 25 of which were on goal, to Kennesaw’s 23. Sarah Reznick and Madisyn Kittell combined for eight saves for the Gators.

The Gators also won in the draw control game, with 19 to Kennesaw’s 10. The only statistical category that Florida did not lead in was caused turnovers. Kennesaw caused eight turnovers to the Gator’s five.

The team took advantage of their free position plays. Florida had eight free-position shots, six of which led to goals.

The Gators got on the board fast, with their first goal just 42 seconds into the game. This would start the chain of five unanswered goals by Florida before Kennesaw scored 12 minutes in.

However, the Gators answered with another scoring run, this one 3-0. The Owls recorded their second goal five minutes later, but it was followed by another 5-0 scoring run by the Gators.

Kennesaw scored right before halftime, but Florida still went into the locker room with a 13-3 lead.

The Florida lacrosse team will come back to Gainesville to take on No. 3 Stony Brook. This will be the Gators’s fourth-ranked matchup and second top-five matchup. Opening draw is set for 12 p.m. this Saturday at Donald R. Dizney Stadium.