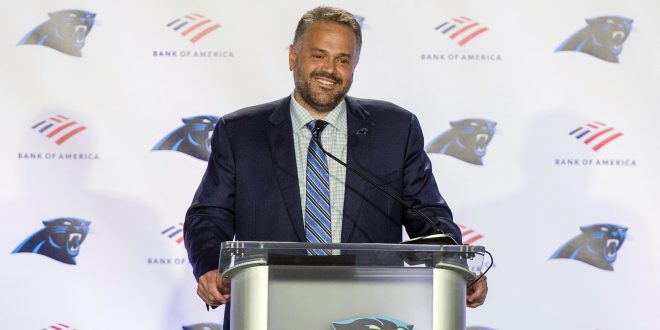 With the NFL Combine quickly approaching, freshman head coach Matt Rhule talked to the media on Tuesday about his team.

The Carolina Panthers hired Rhule on Jan. 7, 2020. Prior to the NFL, he coached at Temple and Baylor for a combined seven seasons. Rhule coached the Bears to an 11-3 record in 2019. He had a 19-20 record overall at Baylor. Notably, he turned around a Baylor program that went 1-11 in 2017 and coached them to two-straight bowl game appearances.

His lack of experience at the highest level does not seem to phase him. According to Rhule, he is more than capable of turning a team around.

As the 2020 NFL Combine approaches, those around the Carolina Panthers organization cannot wait to see how Rhule handles his first tango with NFL scouting. According to coach Rhule, he’s surrounded himself with the people to help him succeed.

Additionally, Rhule says that he is anxious to get started. He feels that any success at the NFL level starts with scouting, and he’s excited to get going.

One of the largest question marks for the Panthers is the status of quarterback Cam Newton. Over the past two seasons, injuries have plagued the former-MVP.

According to coach Rhule, he has a plan to get Newton back on the field and back to MVP caliber.

Additionally, coach Rhule says that he’s excited to work with Newton. He says that Newton is an amazing father and player.

Undoubtedly, the Panthers organization and fans are hungry for success. Last season, Carolina finished 5-11 and last place in their division.

For a team that got a taste of success in 2015, Rhule is confident he can get his team back to that level.

The NFL Combine starts Feb. 27 and runs through March 2. Coverage can be found on NFL Network.

Steven Walker is a beat writer for ESPN Gainesville and is currently studying Journalism & Sports Media at the University of Florida.
@swalker_7
Previous No. 8 Florida lacrosse dominates Kennesaw State
Next Joe Judge ready for head coaching roll in New York