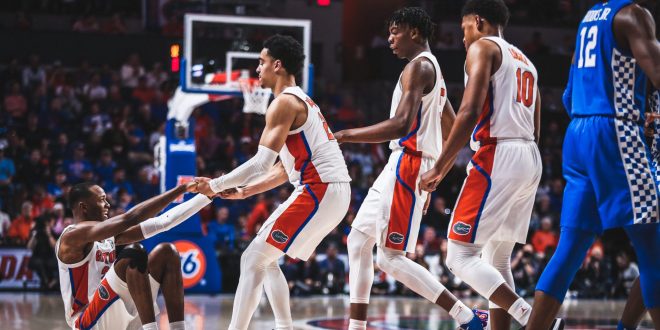 Scottie Lewis (left) is helped up by his teammates. (Credit @GatorsMBK on Twitter)

With the loss, Florida will either place at the four or five seed in the SEC Tournament in Nashville next week. Their seeding depends on the result of the Mississippi State versus Ole Miss game. If Ole Miss wins, Florida would be the 4th seed, but if Mississippi State wins then Florida is the 5th seed.

Nick Richards led Kentucky in scoring with 19 points and 7 rebounds. Of his 19 points, 17 of them came in the second half. Immanuel Quickley, Keion Brooks Jr, and Johnny Juzang all tallied double-digit scoring as well.

For Florida, Scottie Lewis led all Gators with 19 points. Noah Locke followed closely with 14 points on 3-8 from deep, and Keyontae Johnson scored 12 points, 3 rebounds and 3 assists. Andrew Nembhard tallied 8 assists and only one turnover.

Kentucky only led for 11 seconds in the entire game, but they were the last seconds of the game. Florida led at one point by 18 points. The Wildcats shot 62% from range against the Gators, which contributed to their ability to come back from down so much. Kentucky also outrebounded Florida 30-22.

Prior to the game, Florida seniors Kerry Blackshear Jr. and Chris Sutherland were honored for Senior Day.

Florida sprinted out and caught the Wildcats off guard. The Gators exploded to an early 7-0 lead and never relinquished it through the entire first half. Florida’s Lewis poured in 13 points while Florida knocked down five first-half three-point baskets to take a 40-30 lead.

Kentucky’s Immanuel Quickley led the Wildcats in first-half scoring with 9 points on 4-7 shooting. Tyrese Maxey added 4 assists as Kentucky tried to keep pace with a red-hot Gators team in the first half.

Florida’s Kerry Blackshear Jr. appeared to injure his wrist with around four minutes left in the first half. He would try to play it off, but early in the second half he returned to the bench and would not return.

Much of Richards’ scoring explosion in the second half had to do with Blackshear Jr’s injury to his wrist. According to Florida head coach Mike White, the team really struggled to defend him in the closing minutes.

Quickley fouls out of the game with 9:04 left in the game. #Gators

With under 14 to play, Quickley picked up his fourth foul, which sent him to the bench. He would not return until 10:37 in the second half when the Gators led by 17 points. He would foul out of the game with 9:04 left to play.

According to Kentucky head coach John Calipari, when Quickley fouled out, his team found a spark.

Florida took their largest lead of the game with 11:48 left to play as they led by 18 points. Things would start spiraling after that.

Kentucky stormed back in the latter part of the second half behind excellent three-point shooting and 17 second-half points from Richards. With a tip-in from Kentucky’s EJ Montgomery with 11 seconds left, Kentucky took the lead for the first time in the entire game.

Nembhard launched a deep three that rimmed out as time expired to seal the Gators’ loss.

Florida awaits seeding for the upcoming SEC Tournament in Nashville, Tennessee. Stay tuned for updates on who the Gators men’s basketball team will play and when.

Steven Walker is a beat writer for ESPN Gainesville and is currently studying Journalism & Sports Media at the University of Florida.
@swalker_7
Previous Gators Take Bulls by the Horns, Defeat USF In Baseball
Next Florida Baseball Powers Past Bulls