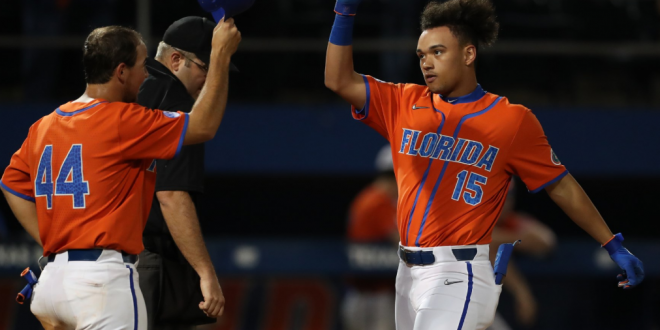 Things are clicking for Florida baseball as the competition steeps up the rest of the way.

The Gators defeated the South Florida Bulls 15-5 to push their record to 15-0. With Alabama dropping to Lipscomb, Florida is now the only undefeated team in Division 1 baseball.

Kevin O’Sullivan on his team’s performance:

A few of the usual suspects continue to do damage in the Florida lineup as the Gators pounded the Bulls pitching staff.

Kirby McMullen had an RBI groundout in the first inning to give Florida the lead. He officially was 0-for-1 but he registered three runs scored and the lone RBI for the whole game.

The eight and nine hole hitters did damage as Josh Rivera and Cal Greenfield combined for three RBIs in the second to push the lead to 4-0.

Jacob Young continued his scorching campaign when he brought home McMullen with a single in the third. Young went 3-for-3 with two RBIs and two runs scored.

Jordan Butler was the biggest producer. He followed up his three straight multi-hit performances with a 3-for-4 day with five RBIs and another home run.

Additionally, Nathan Hickey belted his third home run in as many games. He and Butler went yard in Florida’s five-run sixth to blow the game wide open.

“We spread it out up and down the lineup,” O’Sullivan said.

O’Sullivan on his offensive lineup in general:

After a less-than-stellar start against Troy, Jack Leftwich needed to redeem himself with a strong start on Saturday. And strong it was.

He struck out the game’s first two batters swinging and proceeded to sit down the next 15 in order.

Leftwich entered the seventh inning with a perfect game in his sights. The junior righty went 18-up-18-down before relinquishing a leadoff walk. At least the no-hitter was still in play.

A single to center field the next at-bat erased the no-hit bid as fast as the walk did the perfect game. Then the wheels came off a little bit.

Eventually Justin Alintoff relieved him to finish the inning. He and Ryan Cabarcas bridged the victory. Leftwich pitched 6.2 innings, gave up three earned runs on three hits and struck out five batters on 79 total pitches.

“(I) thought he responded really well,” O’Sullivan said about his pitcher.

Florida goes for the sweep on Sunday at 1 p.m. Hunter Barco is set to man the bump for the Gators. The big lefty fanned nine batters in five innings last Sunday.