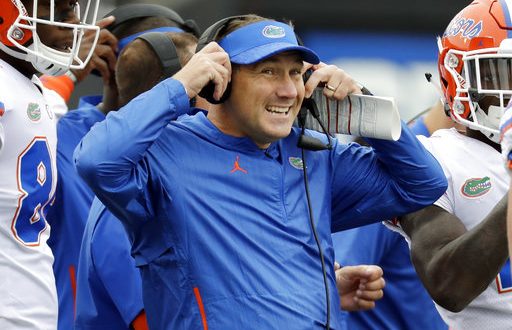 Florida coach Dan Mullen spoke to the media on Monday afternoon to preview spring football that starts on March 16.

Some of the topics that were discussed included the quarterback battle, depth and transfer portal impact.

Since Mullen landed in Gainesville, he has continued to take advantage of the transfer portal. Players like Trevon Grimes, Van Jefferson and Jonathan Greenard have come into this program and made big impacts on the success that has occurred in the last couple of years.

#Gators continue to take full advantage of the Transfer Portal https://t.co/VhNIFPxnok via @247sports

The Gators have been acquiring more talent from the portal, and the team is expecting these players to make an immediate impact in 2020.

Former five-star recruits Justin Shorter and Lorenzo Lingard are expecting to make some plays early on offense next season. Lingard is transferring in from Miami and Shorter is coming from Penn State.

It’s still unknown whether either will be granted immediate eligibility, but If both are available, playing time should be granted early.

Lorenzo Lingard will be a PROBLEM in that @CanesFootball offense! ⚡️

Lingard shows explosive quickness and burst that UF needs to replace after Lamical Perine left to graduation. Shorter is a physical wideout that adds to the already deep wide receiver room at Florida.

The loss of Freddie Swain, Josh Hammond and Jefferson hurts the Gators, however, the amount of young talent on the outside of the offense should still help quarterback Kyle Trask.

Former Georgia standout Brenton Cox is ready to wreak havoc on the line next fall.

The 6-foot-4, 245-pound defensive line has been seen working out in the offseason, and he’s been looking like a prime SEC edge rusher.

Mullen speaks about what he expects from the transfer below:

Cox sat all of last season and waited, as a result, he missed valuable time awaiting a decision from the NCAA.

Mullen voiced his displeasure about the inconsistency at his press conference.

“Hopefully they just really define that stuff cleaner,” he said. “I just think it’d be much cleaner for everybody if there was consistency in the rule.”