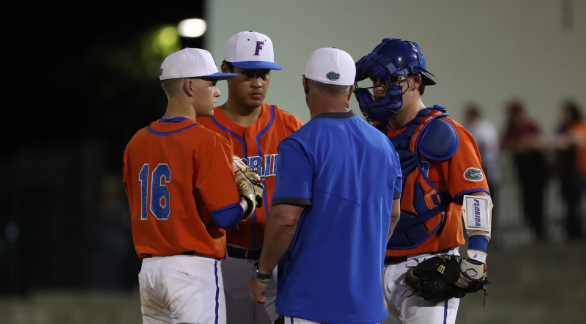 Mike Martin Jr. did something his Dad couldn’t in his last 11 tries in playing baseball against the University of Florida…he  beat the Gators.

The top-ranked Gators fell to number 15 Florida State 2-0 Tuesday night, suffering their first loss of the season.  Not only is it Florida’s first loss to FSU in 12 games, but FSU’s first shutout win in the series since Game 1 of the 2016 Gainesville Super Regional.

Final from The Mac.

Third baseman Kirby McMullen said Tuesday night was the senior class’s first loss to the Noles ever. Sophomore Jacob Young called the loss a reset but you never want to lose a team like FSU.

A season is full of ups and downs. To Gator coach Kevin O’Sullivan, how you respond to the downs can make the difference and McMullen says the team now has to get ready to start SEC play.

McMullen on the loss heading into the weekend:

FSU lefty starting pitcher Antonio Velez cruised. He made it through five and only dealt with three base runners on 64 pitches. Overall, he finished the day with seven strikeouts, two walks and one hit through six shutout innings.

Florida didn’t register its first hit until Kirby McMullen doubled down the left field line in the fourth. The Gators ended the night with just three hits.  The top three hitters combined to go 1-for-12.

“Bottom line we need to do a better job of making some adjustments,” O’Sullivan said.

McMullen said Velez kept them off balance with his chang eup. O’Sullivan concurred but also pegged the lack of adjustments on his lineup’s youth.

Young said Velez controlled the pace of the game and both his off speed pitches were working. They couldn’t string together good at-bats.

The challenge got steeper from there. Parker Messick came in and shut down Florida over the final three innings, striking out seven, to preserve the shutout and ending Florida’s win streak.

O’Sullivan on the offense:

Pitching Keeps Gators In It

Despite four strikeouts in the first two frames, starter Nick Pogue struggled with location. He ended the day with only one run against him in three innings of work.

The only run he gave up came from a misplay in the outfield. It was ruled an RBI single for Reese Albert.

“Seemed we were pitching from the stretch an awful lot,” O’Sullivan said. “We had to make some big pitches.”

Righty Christian Scott had to make a ton of them when FSU had two on and no outs in the seventh. He got the next three guys swinging.

Florida State’s only other run came off a sacrifice fly from Nander De Sedas with runners on second and third with no outs in the eighth.  However, that didn’t overshadow a solid effort on the mound by Gator pitchers.  Tyler Nesbitt shined with four strikeouts and no earned runs allowed in three innings.

O’Sullivan praised Nesbitt coming out and giving his team three scoreless innings in front of 5,000 people against FSU as a freshman.

Regroup and refocus because the real season starts Friday night. The Georgia Bulldogs come to town.

Florida knows the significance of starting SEC play and it’ll want to start the conference slate on a good note after Tuesday’s loss.