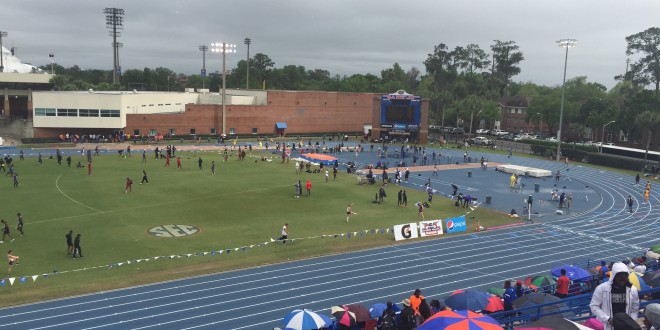 The Pepsi Florida Relays had a rainy start to the day, but fans were prepped with umbrellas. Photo by Bailey Garner.

The 2020 Pepsi Florida Relays have been canceled due to the COVID-19 spread. The announcement was made on Saturday after a release by the Southeastern Conference. This event was scheduled for April 2nd.

This release stated that all athletic activities would be suspended until April 15th. When this date comes, the conference will determine whether or not it would be safe to resume.

The SEC had previously announced that these activities would only be postponed until March 30th.

ALERT 2: Based on the latest developments and the continued spread of the coronavirus (COVID-19), the Southeastern Conference today announced the suspension of regular season competition for teams in all sports on SEC campuses, as well SEC championship events, until March 30.

University of Florida athletic director Scott Stricklin delivered a press conference on Friday with the latest updates. Stricklin announced that every sports facility would be closed until April 15th. This includes practice facilities, locker rooms and meeting rooms.

The only facilities that will stay open during this pause will be the sports health and academic units. The University will keep those open in order to provide health, nutrition, mental health counseling and academic support for the athletes that stay on campus.

You can read the full SEC release here.

The 2020 Pepsi Florida Relays was one of the last events to get canceled by the conference. The first decision taken by the SEC was to continue having the tournaments but without fans.

Other conferenced followed suit in this decision, only allowing essential staff members in the games. But it didn’t take long until these tournaments were officially canceled.

An announcement by the NCAA on March 12th stated the official cancellation of all remaining winter and spring championships. This cancellation included softball and baseball championships which are held in June.

While other sports competitions have the possibility of resuming after April 15th, there have not been any signs of a new date for the relays. Hopefully, a more clear update will be made after April 15th.

These cancellations have brought a lot of frustrations among student-athletes. Most of them coming from seniors who are disappointed by their season ending so soon.

Many of these student-athletes are hopeful that the next update will bring good news and will give them a chance to finish their season.

Camila is a senior at the University of Florida, who served as a beat writer for the women's basketball team from 2019 until the 2021 season. She was also a beat writer for the Gators football team during the 2020 season. Camila is also WUFT's news director as well as a sports reporter/anchor.
@CamilaMaffuz
Previous Alachua County Cancels Sporting Events in Wake of COVID-19
Next Jaguars Send Calais Campbell to Ravens