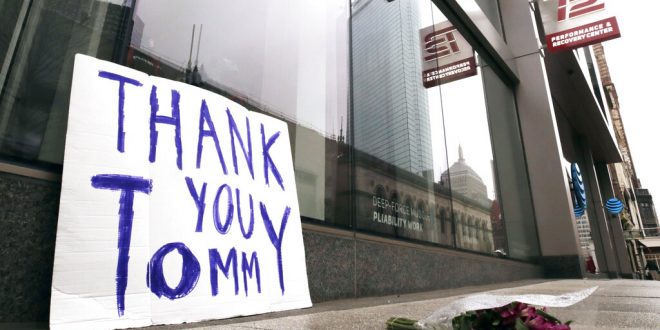 A bouquet of flowers and a sign thanking former New England Patriots quarterback Tom Brady, who announced he was leaving the football team, rest on the sidewalk outside the TB12 training center in Boston, Tuesday, March 17, 2020. (AP Photo/Charles Krupa)

Former Patriots QB Tom Brady announced on social media Tuesday that his time with the franchise will come to an end.

Brady took to Instagram and Twitter to make the announcement. He thanked fans, coaches and former teammates.

In a two-part message, Brady expressed his gratitude and acknowledged his loyalty to the franchise.

“I don’t know what the future holds but it is time for me to open a new stage for my life and career,” he wrote. “Although my football journey will take place elsewhere, I appreciate everything that we have achieved and am grateful for our incredible TEAM experiences.”

“Examples of Tom’s greatness are limitless, going back even before he was drafted. We witnessed how he prepared when he wasn’t playing, how he performed when he got his opportunity, what he did to continuously improve, his leadership, his mindset, the example he set, and, of course, the person he is. I am extremely grateful for what he did for our team and for me personally. “Sometimes in life, it takes some time to pass before truly appreciating something or someone but that has not been the case with Tom. He is a special person and the greatest quarterback of all-time.”

“When Tom arrived in New England as an unheralded, sixth-round pick, no one could have imagined the fairytale story that would be written, the records that would be broken or the joy he would bring to an entire region. He leaves 20 years later as the winningest quarterback in NFL history with six Super Bowl victories, nine AFC titles and 17 division championships. He has been an exemplary teammate and leader. There simply will never be another Tom Brady. I now look forward to the day we can bring him back home to New England to celebrate his Patriots career, his endless achievements and his legacy as the greatest of all time. I love him very much.”

The 42-year-old will leave New England with six Super Bowl rings and 41 playoff starts since 2001. Brady’s 20 seasons with the Patriots are the most ever with one team by a quarterback. Among his additional accomplishments with the franchise are: four Super Bowl MVP awards, three NFL MVP awards, and becoming the first 42-year-old QB to start every game in a regular season.

Brady will leave the Patriots as one of the most decorated quarterbacks of all time.

20 years.
6 championships.
A lifetime of memories.

Although the QB’s reign in New England has come to an end, there have been some hints as to where he may end up next.

ESPN’s Adam Schefter said in a tweet Tuesday night that Brady’s journey will continue with the Tampa Bay Buccaneers.

Tampa is the expected landing spot for Tom Brady barring anything unforeseen, sources tell me and @JeffDarlington.

There's no signing date or announcement officially set up, but Brady is expected to be a Buccaneer.

NFL’s Ian Rapoport said the deal with the Bucs could land Brady up to $30 million per year.

To be clear: Former #Patriots QB Tom Brady has an agreement in principle to join the #Bucs, source said. It is believed to be roughly $30M per year.