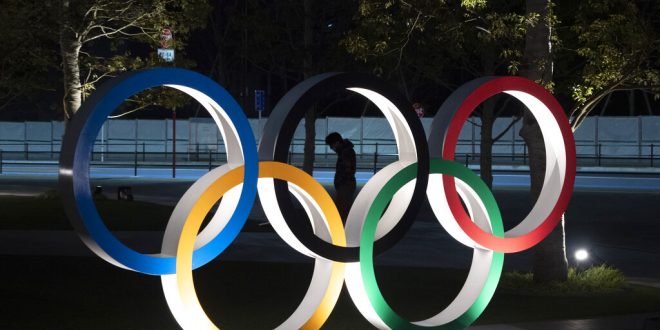 A man is seen through the Olympic rings in front of the New National Stadium in Tokyo, Tuesday, March 24, 2020. IOC President Thomas Bach has agreed "100%" to a proposal of postponing the Tokyo Olympics for about one year until 2021 because of the coronavirus outbreak, Japanese Prime Minister Shinzo Abe said Tuesday. (AP Photo/Jae C. Hong)

After coronavirus concerns continue, the 2020 Summer Olympics are happening in 2021.

The Decision on the Olympics

Japan’s prime minister Shinzo Abe, after talks with IOC President Thomas Bach, announced that the Olympics will be held in 2021.

After his telephone talks with IOC President Bach, PM Abe spoke to the press and explained that the two have agreed that the Tokyo Olympic Games would not be cancelled, and the games will be held by the summer of 2021. pic.twitter.com/ihe8To2g3R

History shows that the Olympics are only moved or canceled during times of war. The games were first canceled in 1916 during World War I. Also, during World War II, the games for 1940 and 1944 were also stopped. But, the decision was made after the WHO described the pandemic to be “accelerating.”

ESPN’s Jeremy Schapp went on to explain more on the impact of the games moving to 2021.

Two countries, Canada and Australia, both agree that teams from those countries would go to the games if they were played in 2020.

On Monday, President Donald Trump said he will approve of Abe’s decision.

We will be guided by the wishes of Prime Minister Abe of Japan, a great friend of the United States and a man who has done a magnificent job on the Olympic Venue, as to attending the Olympic Games in Japan. He will make the proper decision!

Many athletes support the move with the coronavirus pandemic continuing to impact daily life around the world.

First, Former Florida track athlete and Olympic hopeful Grant Holloway tweeted on March 19 saying the whole year should be canceled after it was announced the games will be postponed until next year.

Second, US Olympic and Paralympic committee president Sarah Hirshland shared her thoughts with all US Olympians as she and the rest of the sports world prepare for Tokyo in 2021.

Finally, Team USA member and gold medalist Lolo Jones tweeted with a much more light-hearted tone now knowing she has an extra year to prepare for the games.

FINALLY The OLYMPICS OFFICIALLY postponed for a year!! No box of Wheaties for me today. #breakfastofchampions pic.twitter.com/BAtlDUliQE

This is the right move for all parties. If we want to continue to flatten the curve and hopefully end this virus we all must self-isolate. So, we will continue to lose out on things we love for right now. But, we are doing all of this to keep the most important thing safe, our health.