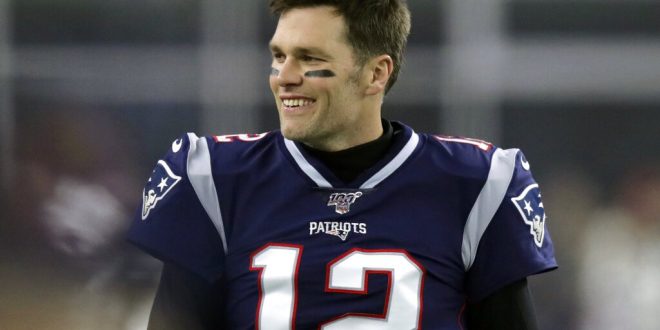 FILE - In this Jan. 4, 2020, file photo, New England Patriots quarterback Tom Brady walks on the field before an NFL wild-card playoff football game against the Tennessee Titans in Foxborough, Mass. Six-time Super Bowl champion Tom Brady has signed a two-year contract with the Tampa Bay Buccaneers, saying he is embarking on a “new football journey.” The 42-year-old quarterback who spent the first 20 years of his career with the New England Patriots announced his decision Friday, March 20, 2020, in an Instagram post and thanked the Bucs for the opportunity. (AP Photo/Charles Krupa)

Anyone and everyone have been talking about Tom Brady.

Tim Hasselbeck is an NFL studio analyst for ESPN. He gives his thoughts on the Patriots, Brady and Jameis Winston.

James Winston still remains unsigned. There is no doubt he has starter talent but his ball security has not been there during the Buccaneers season. Winston had 111 turnovers in his career so far and leads with the most in the NFL since 2015.

Hasselbeck thinks Winston would be a good fit for the Green Bay Packers. Winston is 10 years younger than Aaron Rodgers and can learn ball control from a great quarterback. If he would sit back a year behind a veteran starting quarterback and learn to be aggressive with fewer turnovers, he will be successful wherever he goes. Maybe this coming up season isn’t for him but that doesn’t automatically mean his career is over.

For the New England Patriots, many fans think Jarrett Stidham, the Patriots backup quarterback, will start in the 2020 season. Hasselbeck has some different views on that. Cam Newton is being released by the Carolina Panthers. The Patriots are not a team to just give someone a position, but to earn it. Even if Newton doesn’t start or even play for the Patriots, he should be given the chance to battle out against fourth-round pick Stidham along with other quarterbacks.

Brian Hoyer and Cody Kessler are still on the quarterback roster. New England loves Stidham but it’s going to become the battle of the replacement during training camp. That’s the Patriots way.

Brady and the Bucs

People can’t expect Tom Brady to take the Buccaneers to the Super Bowl his first season in the NFC South, which has the best collection of quarterbacks in the league. Tom Brady will have to go against Matt Ryan from the Atlanta Falcons and Drew Brees from the New Orleans Saints twice respecitively

Brady seems like a good fit for the Buccaneers. In an interview, he didn’t ask about money, he didn’t ask to bring players with him or to keep his number. He just knew that Arians, offensive coordinator Byron Leftwich, quarterbacks coach Clyde Christensen and special assistant Tom Moore would collaborate with him on game plans. Brady’s coming from a 20 season game with six rings to one of the worst winning percentage teams in the league.

We’re going to watch Tom Brady turn this team around with all the amazing players the Bucs have. They resigned eight of their best players and five of them were on defense. With a strong defense, Brady can always work with his offense and bring this team to new heights.