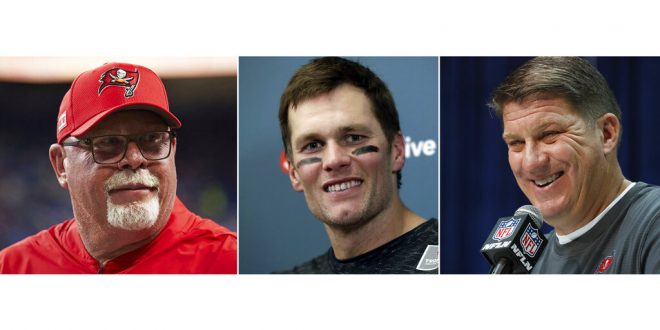 Matt Hasselbeck cut his teeth slinging passes for the Seattle Seahawks throughout the 2000s. He appeared in three Pro Bowls and earned a spot on the Seattle Seahawks 35th Anniversary Team in 2010. The Brett Favre back-up turned reliable NFL starter knows a thing or two about reinventing yourself. As an NFL quarterback, Hasselbeck started 158 games through 17 seasons.

The man who once sat in quarterback meetings with Andy Reid, Mike McCarthy, Brett Favre, Doug Pederson, Jim Zorn, Andrew Luck and Gator great Danny Wuerffel provided insight on some of the NFL’s free-agent quarterbacks. Who may need to reinvent themselves in order to land another starting gig in the NFL?

Brady in, Winston out

After the Tampa Bay Buccaneers signed 42-year-old and six-time Super Bowl champion Tom Brady to a two-year, $50 million contract, it was clear that Jameis Winston’s days in Tampa were over.

So why let Winston walk in free agency in favor of a soon to be 43-year-old Brady? After all, Brady is coming off a season that featured 1,052 fewer yards and nine fewer touchdowns on just 13 fewer attempts.

Well, Winston led the Bucs to a measly 7-9 record and led the league with 30 interceptions. Through five seasons with the Bucs, Winston compiled a 28-42 record as a starter. He led the Bucs to a record above .500% just once. Add his 50 career fumbles to his 88 career interceptions and you’ll find that his 138 turnovers exceed his 121 passing touchdowns and his 10 rushing touchdowns.

What’s Next for Winston?

ESPN’s Matt Hasselbeck believes that it’s Winston’s trouble with accuracy that cost him his spot in Tampa Bay. It may even cost him the opportunity to earn a starting job elsewhere.

Hasselbeck’s belief that there may not be enough starting jobs to go around is valid. Brady’s move to Tampa, Drew Brees’ extension with New Orleans and Philip Rivers’ signing in Indianapolis leaves few teams that are looking to win now and need a quarterback. Teams like the Patriots and Chargers seem to be content with the quarterbacks on their rosters. So what’s next for Winston if he can’t find a place to start?

The Seahawks’ legend suggests that Winston may need to “take a step back to take two steps forward” and join Pete Carroll and Russell Wilson in Seattle. Hasselbeck said that Winston could learn under the tutelage of Wilson and better understand how to prevent turnovers from Pete Carroll.

The move would also offer insurance at the quarterback position for Carroll and company, even though Wilson hasn’t missed a start in his career.

Another former first overall pick is looking for a new home.

Once the deal was announced, all eyes were on the 2015 NFL MVP, All-Pro and Offensive Player of the Year.

News broke last Tuesday that the Panthers granted permission to Newton to seek a trade partner. Newton disputed that statement with the belief that he didn’t have a choice.

Cam Newton responds, says the Panthers forced him into seeking a trade. pic.twitter.com/RsbECMr1qH

One week later, there has not been a trade to report. Consequently, Newton, who carries a $21.1 million cap hit and has one year left on his contract, is expected to be released Tuesday.

What’s next for Cam?

Hasselbeck believes that a reunion with former Panthers coach Ron Rivera is a best-case scenario for all parties involved.

With 2019 first-round draft pick under contract for three years and a team option for a fourth year, Hasselbeck suggests that it makes a lot of sense to bring in the veteran Newton to help mentor the second-year pro.

Additionally, Rivera’s approach to coaching Newton in Carolina proved to be quite fruitful.

The pair won three NFC South championships and led the Panthers to an NFC Championship in 2015 before losing to the Denver Broncos in Super Bowl 50.

As Newton continues to recover from foot surgery, he turns 31 in May. That paired with the fact that he has generated some off-the-field buzz leads Hasselbeck to believe that the Redskins are the only logical fit.

Those accolades cast a gigantic shadow over the next starting quarterback in Foxborough, Massachusetts.

Tom Brady set virtually every franchise passing record for the Patriots and amassed a 219-64 record through 20 years of service in New England.

An equally tough act is to predict who that new starter will be.

Many believe that second-year quarterback Jarrett Stidham will fill the void.

As it stands, the Auburn product will battle the newly acquired veteran Brian Hoyer, who has played parts of five seasons in New England, for the starting role.

Hasselbeck suggests that the Patriots would be comfortable with Stidham as the answer, but suggests an alternative with more experience.