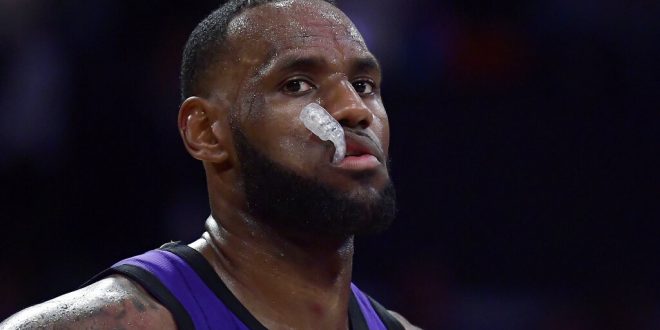 FILE - In this March 1, 2019, file photo, Los Angeles Lakers forward LeBron James pauses during the closing seconds of the team's 131-120 loss to the Milwaukee Bucks, in Los Angeles. The Lakers have endured a miserable season, giving James a much longer summer break than he's used to. (AP Photo/Mark J. Terrill, File)

LeBron James misses basketball. The whole world wants to see him reunited with the game, almost like a tragic love story. James hopes that this story — and this season — has a happy ending.

In the final weekend before the season got put on hold, the Los Angeles Lakers knocked off the Milwaukee Bucks and Los Angeles Clippers. LeBron’s Lakers solidified their spot atop the NBA’s Western Conference with the pair of wins. James doesn’t know if he can have closure if the season is canceled, but LeBron is clearly impressed with what his team accomplished before the shutdown.

“I can have some satisfaction on what our team has been able to do this year, having a first-year coach, first-year system, a whole new coaching staff, bringing on so many new pieces to our team this year,” James said. “Doing the things that I honestly — like I told you guys all year — I honestly didn’t think that we would be able to come together as fast as we did. I thought it would take us a lot longer than it did.”

As it stands, the Lakers are in prime position to win a championship should the season resume. James yearns for the opportunity to turn this question mark of a season into an exclamation point for his team.

With how excited LeBron is for the NBA season to return, it’s no surprise that he’s making sure his teammates are also ready to get back on the court. However, James knows that the health of the nation is more important.

LeBron is conscientious of player health as well. James keeps this in mind as the league considers alternative options in which the season could reach its conclusion.

Earlier in March, LeBron might not have been on board with such a scenario. James stated that he did not want to play NBA games without fans in attendance.

Times have changed. The sports world waits as LeBron longs to reunite with his true love, basketball.