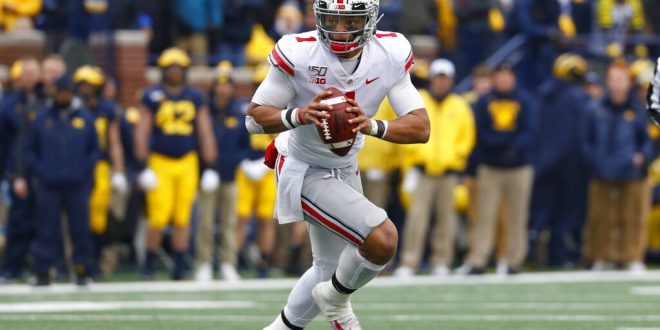 Ohio State quarterback Justin Fields (1) rolls out to throw against Michigan in the first half of an NCAA college football game in Ann Arbor, Mich., Saturday, Nov. 30, 2019. (AP Photo/Paul Sancya)

How Ohio State Football is Adapting to COVID-19

Like the rest of the world during the COVID-19 pandemic, the Ohio State Buckeyes are adapting to a new normal.

The upcoming year looked promising for Ohio State football. According to 247Sports, the Buckeyes had the No. 5 2020 recruiting class. This was to add onto a team that only suffered one loss last season.

Now, there are plenty of broader question marks. With much outside of their control, athletic director Gene Smith and head coach Ryan Day are trying to put their team in a position to succeed as best as they can.

The football team has not practiced since the first week of March, just before Big Ten canceled all sports through the end of the academic year. The university also transitioned to only online classes around that time.

There is no timetable for return to normal activities. The Buckeyes were supposed to play their spring game last weekend.

“We’re not going to rush this. We got a major societal issue,” Smith said when speaking to reporters on Friday. “Football is important, I know that. But, at the end of the day, we’ve got people dying.”

Smith also answered questions about potentially playing in front of no students or fans. The Buckeyes are supposed to open the season Sept. 5 when they host Bowling Green.

Despite Ohio’s current “stay-at-home” order, Ryan Day is still developing workouts for his players. Although, the 2019 Big Ten Coach of the Year acknowledges it is ultimately up to them to carry out.

If there was to be a football season, both Day and Smith believe the players need time to come back for proper conditioning and practice before games. On Friday, Smith referenced this time frame to be between four and eight weeks. Day believes he would need about six.

Smith also acknowledged the importance of the Ohio State football program to the university and the community. It is “the driver of the budget,”  in terms of school sports funding, and has a positive economic impact on the central Ohio area.

Despite the uncertainty facing the NCAA, Smith remains hopeful that there will be a football season in 2020:

I'm a senior journalism student at Florida. I love sports, and I love covering sports. I'm one of the beat writers for the Gator soccer team right now, and if you follow me on Twitter @johnmiceli13 you'll never miss a soccer update
Previous Todd Gurley is excited to be back in Georgia with Atlanta
Next Wide Receiver Allen Robinson II Talks Bears’ Offseason