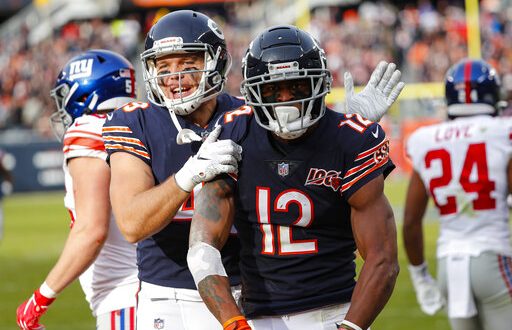 After an 8-8 season, the Chicago Bears are looking at picks in the second, fifth, sixth and seventh rounds of the 2020 NFL Draft. The lack of first and third-round picks for the Bears stems from the Khalil Mack trade.

In his two seasons receiving for the Bears, Allen Robinson II has scored 11 touchdowns. The 26-year-old had seven of those touchdowns during the 2019 season with 1147 yards and 98 receptions.

Changes are coming for the Bears though as Nick Foles joins the roster from the Jaguars. Chicago traded its fourth-round pick of the 2020 draft for the 31-year-old quarterback. Foles won MVP honors in Super Bowl LII with the Philadelphia Eagles in 2017. With the addition of Foles, questions of whether or not Mitchell Trubisky will start again for the Bears have ensued.

Unfortunately though, due to the effects of the Coronavirus, neither of the quarterbacks is able to show how they work with the receivers much this off-season according to Robinson II.

With Foles being new to the team, however, receivers like Robinson have not been able to get to know him very well other than through mutual friends. Robinson II says that what he has heard about the new quarterback has been positive and that he is looking forward to seeing more of him.

With the number of confirmed cases of COVID-19 reaching 1,766,867, the NFL has begun taking precautions to prevent further spread.

Robinson II says that the Bears are uncertain about when they will be getting back to practice, as many other teams are as well.

This is also causing athletes to completely change their schedules and how they prepare for the season. Most training facilities and gyms have been shut down, forcing athletes to move their workouts indoors. Robinson II says that he has moved his training to his in-house gym that is different from his usual workouts.

Rylee is a second year Journalism major with a specialization in Sports and Media at the University of Florida College of Journalism and Communications.
Previous How Ohio State Football is Adapting to COVID-19
Next COVID-19: Fluidity challenges NCAA athletics, says UNCC’s AD Mike Hill