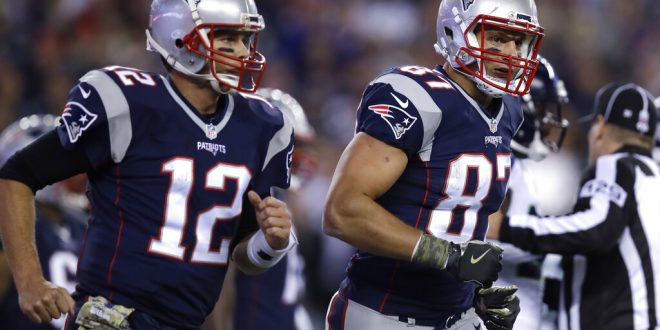 FILE - In this Nov. 13, 2016, file photo, New England Patriots quarterback Tom Brady (12) and tight end Rob Gronkowski head to the sideline during the team's NFL football game against the Seattle Seahawks in Foxborough, Mass. Gronkowski has agreed to a reunion with Brady. The agent for the retired New England star confirmed Tuesday, April 21, 2020, that pending completion of a physical, Gronkowski has agreed to play for the Tampa Bay Buccaneers, who are acquiring his rights from the Patriots. (AP Photo/Charles Krupa, File)

Gronkowski will reunite with Brady in Tampa Bay

Rob Gronkowski is getting another chance to play with former teammate Tom Brady. Gronkowski retired back in 2019 with the Patriots after an injury, but is returning to the league, apparently feeling stronger than ever before. New England closed a deal on Tuesday that reunites the retired tight end with Brady in Florida.

The New England Patriots traded Gronkowski and a seventh-round pick to the Tampa Bay Buccaneers in exchange for a fourth-round pick in the 2020 draft.

Gronkowski retired from the league on March 24, 2019, ending his nine-year career, winning three Super Bowls with New England. But, Gronkowski recently showed interest in playing again. The 30-year-old retired player informed the Patriots of his interests to play again with Brady and Tampa Bay. Less than an hour after the news became public, the trade was agreed upon.

According to the tight end’s agent Drew Rosenhaus, Gronkowski will honor his current contract. He will play the 2020 season on a one-year deal worth $10 million.

While many are stoked that this elite tight end is heading to play with Brady again. Some feel this is only a valuable trade for the Patriots because of Gronkowski’s age and health issues.

ESPN’s Adam Schefter expounds on why he believes only the Patriots value from the trade:

Others are shocked that the tight end is even returning to the league. Since his retirement, no one had a clue he even had intentions or interests of returning.

There is no doubt that Gronkowski is one of the best tight ends in NFL history. He has played his entire NFL career with Brady, and their accomplishments together speak for themselves. Brady and Gronkowski have built chemistry off and on the field that will only benefit them as they continue their career. Both players have elite skills and championship mindsets and work ethics.

The two stars will soon unite together in a new city striving to reach for their fourth title shared between them.