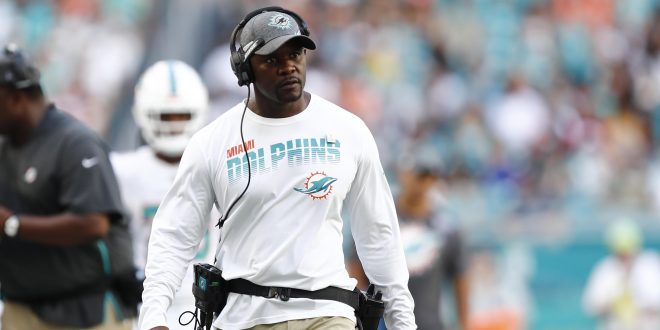 How the Miami Dolphins are Positioned to Control the 2020 NFL Draft.

The Miami Dolphins own three first-round picks in this year’s annual league draft, including five of the first 56 picks. The leadership of owner Stephen Ross and General Manager Chris Grier put the team in position to build a lasting winner with one keyword in mind: patience.

Ross expressed the importance of changing the organization’s approach to how it conducts business. The Dolphins were soon to embark on a multi-year rebuild that was unlike any the league has ever seen.

The biggest move had yet to be made. That occurred in the afternoon of March 15, when the Dolphins traded the starting quarterback of the previous seven years, Ryan Tannehill, to the Tennessee Titans in exchange for a fourth-round pick in 2020. Tannehill has since gone on to win the starting job, take the Titans to the AFC Championship, and sign a $118 million contract extension this offseason.

No talent on the roster

Suddenly, the Dolphins were bereft of talent and had a limited veteran presence as well. Veteran running back Frank Gore chose to sign with the Bills after the Dolphins opted not to resign him. The same happened with right tackle Ja’wuan James, who signed a mega-deal with the Broncos. The two added to a 2020 stash of draft picks via the NFL compensatory system.

Robert Quinn, a 29-year-old pass rusher, was traded to the Cowboys for a sixth-round pick. He then proceeded to have a double-digit sack season and sign a $70 million deal with the Bears last month.

Beat writer for the Miami Herald, Adam Beasley, says the easiest part is tearing it down. “The hard part is building it back up, and the success of that remains to be seen,” Beasley says. The Dolphins have given themselves the best possible chance to build a winning team. That begins and ends with the head coach.

When this began, the Dolphins knew they had to find a bright young leader who had the patience to transform the locker room. After weeks of interviewing more than 10 candidates, in mid-January, Ross and Grier made their decision.

Their choice couldn’t report to the team until early February because his team, thanks to his defense, found their way in the Super Bowl. Brian Flores, a 37-year-old former-scout and current Linebackers coach for the New England Patriots was the chosen one to be the face of this rebuild and this franchise for decades to come.

Flores spent the previous 16 years with the most successful organization in professional sports, making it clear he knew just one thing: winning. That is what Ross and Grier wanted to bring to Miami. Wins.

Flores brought more than that. He brought leadership. He brought discipline, grit, determination, and an excellent defensive scheme that fit the mold of the modern NFL. When the Dolphins selected a 37-year-old Harvard graduate, Ryan Fitzpatrick, to be the team’s signal-caller in 2019, it was clear what type of quarterback Flores preferred. He likes a smart, well-versed leader that has winning as his top priority.

Many believed the Dolphins would grab their QB for the future in the draft. They were proven wrong when the Dolphins passed on the big arm from Ohio State Dwayne Haskins, and instead selected Clemson defensive tackle Christian Wilkins with the 13th pick. Wilkins, captain of a team that won two national championships and natural-born leader, won the Academic Heisman in 2019, proving once again Flores values smart leaders.

Stockpiling for the Future

Beginning in late April, the Dolphins created a stockpile of draft picks, unlike anything this organization had ever seen. During the 2019 Draft, the Dolphins traded down in the second round, grabbing an extra second-rounder for 2020.

The Dolphins traded for 22-year-old former first-round Quarterback Josh Rosen, a low risk, high reward move that is seemingly negligible in the future. The move to get Rosen was a test trial, taking low risk and potentially franchise QB. With Rosen costing the team virtually nothing he will be easy to move on from, and the Dolphins likely will soon.

The Dolphins went off-script in late August. Just a week before the season was set to begin, the Dolphins traded arguably their best player in left tackle Laremy Tunsil along with receiver Kenny Stills to the Houston Texans. The Dolphins didn’t plan on trading a 25-year-old cornerstone at a position of value, but when the Texans dangled two first-round picks and a second-rounder it was hard for a team in rebuild mode to pass up. The Dolphins of old would not have made this move, because winning-now was always important. In 2019, it wasn’t.

A few weeks later, the Dolphins once again made a surprise move, trading 22-year-old starting safety and 2018 first-round pick, Minkah Fitzpatrick for a first-round pick in 2020. The move was simple: Brian Flores wanted Fitzpatrick to be a versatile chess piece in his defense, as he knew he could, but Minkah refused because he wanted to stick with one position. When a Steelers team who had just lost their starting quarterback Ben Roethlisberger to injury came calling, the Dolphins answered and gladly accepted an extra piece to the draft pick stash.

Miraculously, the Dolphins found themselves owning a league-high 14 draft picks (including compensatory picks). However, the team was so bereft of talent many thought the team might be the worst in NFL History.

Building a Winning Culture on the Field

In 2019, the goal was not to win. Unlike years past, the Dolphins actively weren’t trying to win for this season, which made trading some of their best players far more palpable.

Dolphins fans were seemingly on board as the idea of a “tank” for a future Quarterback became ever popular. Despite the expected rocky 0-7 start, Flores somehow was able to rally the troops and secure wins.

There’s no tanking in football

The Dolphins finished the year 5-11, after defeating the 12-3 Patriots in what was an important game for playoff seeding for New England. The win was an incredible accomplishment for Flores and his team, which had the look of one of the worst teams in NFL history early on in the year.

While winning games seemingly derailed the “tank” and the master plan to get the first overall pick, the rest of the league took notice. Flores had convinced a winless locker room after seven weeks to continue to fight and stay hungry. The wins paid dividends this past spring as Miami became a desirable destination for free agents looking to play for a bright young coach and an up and coming organization.

The culture had been set. The Dolphins now have the coach, the front office, and resources in place to build a talented roster. 14 Draft picks. $90 Million in cap space. Now it is time to build a contender.

An Exciting Future Lies Ahead

For the Miami Dolphins, an exciting future lies ahead. Thus far this offseason, the Dolphins have opened up their wallets, making good use of a league-leading $90M in cap space. The Dolphins signed 10 players in total, each player under the age of 30. Each player is versatile and fits the Dolphins mold.

Guard Ereck Flowers has played both guard and tackle in his career.

Defensive end Shaq Lawson plays both interior d-line and edge rusher and is a run stopper.

Cornerback Byron Jones, who the Dolphins threw $82 million at, played both safety and cornerback in Dallas, and is an elite lockdown corner in man coverage.

Bringing in a winning attitude

Linebacker Kyle Van Noy is a do-it-all run-stopper, pass rusher, and coverage linebacker. Van Noy spent the last six years in New England, three of which he was coached directly by Flores when he coached linebackers. Van Noy is the perfect chess piece for this defense.

Three of the 10 players signed are former Patriots — all three of which took notice when the Dolphins went on the road and took down New England in the final week of the season. Newly signed center Ted Karras said, “I have a lot of respect for when they came up to New England and came up and beat us. That earned a lot of respect from me, so I’m looking forward to being a part of a team with those guys.”

Every player signed made sure to say one thing: their love and admiration for Brian Flores. Flores, along with nice weather and no state income tax, were the reasons why these players chose Miami as their home.

The Most Important Night in Franchise History Awaits

On April 23 the Miami Dolphins will select their quarterback of the future. Many questions linger on who it will be and how they will select him. With three first-round picks, the team has plenty of ammo to go up and get their guy.

Who is their guy?

That’s a question it appears only Grier, Flores, and Ross know.

The Dolphins are linked to seemingly every draftable quarterback and are doing their homework. Will they take one at five? Will they wait until 18? That’s the luxury of this rebuild. The Dolphins have options. “We can do whatever we want,” Grier said at the combine. He’s right. Anything can happen.

Adam Beasley isn’t convinced the Dolphins are comfortable with Tua’s medicals. He says the Dolphins don’t have a preference between Herbert and Tua and will likely stay at five and take whichever is available.

It isn’t clear who they will ultimately decide to take, but it is very clear that they own the draft. The team took control of this offseason with the league’s most cap space and draft picks. Beginning 15 months ago, the Dolphins brought in a new philosophy and a new amount of patience.

Building up to this moment

The Dolphins completely tore down the roster, passed on a QB in last year’s draft, endured a season of losing, pulled out some surprising wins, and prepared to build it back up with an unprecedented amount of ammo.

How the Dolphins use the assets is up to the three men in charge: Stephen Ross, Chris Grier and Brian Flores. No matter what they do, remember the importance of patience. They have the right people in charge. If there ever was a rebuild to be successful, this appears to be it. It has all gone to plan thus far, it is now time to put the plan into action.

With the fifth pick in the 2020 NFL Draft, the Miami Dolphins select….

Will Levenson is a Journalism and Sports Media major at UF. He produces daily shows for WRUF, including "Sport Scene with Steve Russell," "Harp on Sports," and "The Tailgate." In addition, Will provides weekly sports updates for WUFT News and radio Sportscenters for WRUF radio. Will has been a writer at ESPN Gainesville since September 2019.
@BigWillLevenson
Previous NFL Commissioner Goodell speaks ahead of NFL Draft
Next Billy Donovan on possible NBA return and UF naming court after him