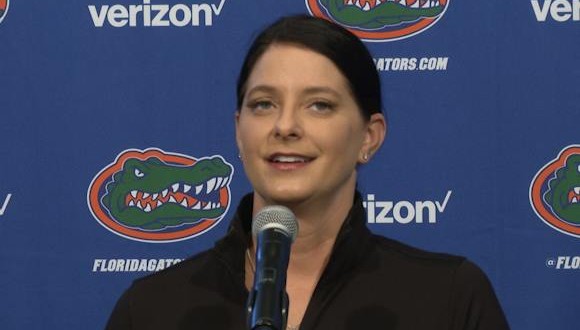 Florida Gators Gymnastics Coach Jenny Rowland completed her sweep of postseason coaching awards by being honored WCGA National Coach of the Year.  She was voted on by her fellow collegiate gymnastic coaches.

Rowland is the fourth gymnastics coach to receive this reward at the University of Florida. She joins Rhonda Faehn (2007), Judi Markell (1994) and Ernestine Weaver (1992).  Rowland won the reputable award after her fifth season as the Gators head coach.

Looking Back at Florida’s Unbeaten Season

Matching its coach’s actions, Florida Gymnastics swept its competition this season.  The Gators were 10-0 and had a No. 2 ranking in the final Road to Nationals standings.

In the SEC, the Florida Gators were 7-0 and undefeated in conference play for the first time since 1992. Therefore, earning them back-t0-back regular-season SEC titles.

“I would have to say this is one of the best teams I’ve coached,” Rowland said.

Poising for a late run in both the SEC and NCAA Championships, Florida ranked in the top three in each final event ranking.

The impending danger of the coronavirus, however, caused the NCAA to cancel women’s gymnastics conference and national championships.  But before everyone went their separate ways for social distancing, the Gators Gymnastics team had a surprise for its seniors.

“We made our own senior night for one hour,” Rowland said.  “Every single athlete’s parents were there in the gym and we had one hour together to wish our seniors all the best and thank them for everything that they have given to the program, to the team.  Looking back, it was a very memorable moment.”

The Gators were one meet away from beginning postseason play.

Leading the way, Thomas earned a selection in all five All-American awards.  She has first-team honors in uneven bars, balance beam, floor exercise and all-around.  Further, she earned a second-team honor in vault.

“She’s always had that poise and (she’s) just that special player when you see her out competing it’s just breathtaking to watch her compete,” Rowland said on Thomas.  “The power, the grace and really just to add that confidence on top of that this past season.”

Thomas was the only gymnast last season to score a perfect 10 in three different events (bars, beam and floor).  In addition, SEC Gymnast of the Year went to Thomas.

The entirety of Steve Russell’s interview with Jenny Rowland is in the SoundCloud link below.