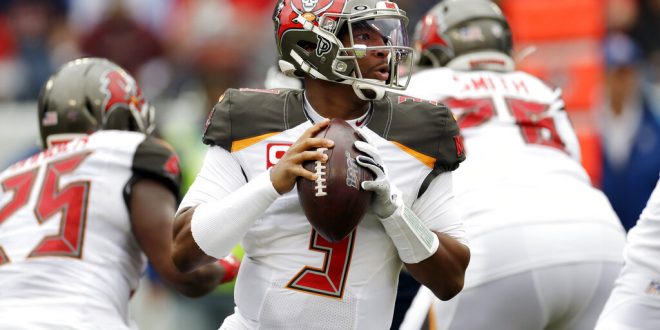 FILE - In this Oct. 27, 2019, file photo, Tampa Bay Buccaneers quarterback Jameis Winston (3) passes against the Tennessee Titans before an NFL football game Sunday, Oct. 27, 2019, in Nashville, Tenn. A person familiar with the situation says the Saints and Winston are working on a contract proposal to make the former Buccaneers starter a backup to Drew Brees in New Orleans. The person said Sunday, April 26, 2020, that the Saints and Winston are in “advanced” talks to get a deal done. The person spoke to The Associated Press on condition of anonymity because negotiations were ongoing. (AP Photo/James Kenney, File)

For Jameis Winston, the opportunity to work with Sean Payton and Drew Brees in New Orleans was too beneficial to pass up.

After the Tampa Bay Buccaneers decided against resigning Winston, the free agent agreed to a one-year deal with the Saints.  The one-year contract worth $1.1 million will see Winston make $19 million less than he did last year with the Bucs.

The #Saints have agreed to terms on a one-year contract with QB Jameis Winston!

Despite the financial setback, it presented another chance to play in the NFL.  Still, Winston believes that he can be a starting quarterback in the league, and that signing with the Saints was a faith-driven decision that will return him to that position.

As well, learning and working with a Super Bowl-winning duo in Payton and Brees was an incentive.

With a Super Bowl ring on his finger and the most passing yards and touchdown passes in NFL history, Brees has a highly decorated career.  However, it was also Brees’ off-the-field gestures that convinced Winston of working alongside him.

Although signed as Brees’ backup, the 41-year-old is going into his 20th season so the possibility of Winston playing important minutes for the Saints next season is not lost.

In Week 2 of the 2019 NFL season, Brees suffered a torn ligament in his right thumb.  Then backup quarterback, Teddy Bridgewater, entered the game and started the next five games until Brees came back from injury.  Bridgewater, who was on a similar one-year deal as Winston, won all five games he started.

His impressive showing in the beginning of the season earned Bridgewater a three-year, $63 million contract with the Carolina Panthers.