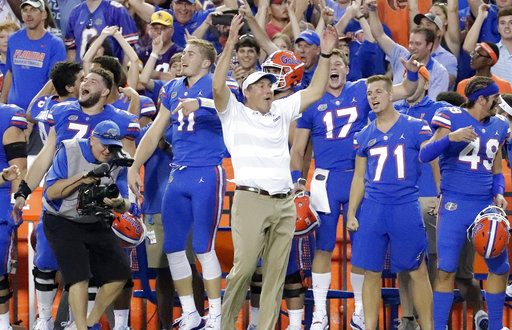 For the second consecutive week, Florida is in the news because of a player in the transfer portal. However, this time, it’s good news for Florida. The Gators lost offensive linemen Issiah Walker Jr. last week but were able to replace him with Stewart Reese this week.

Reese was originally recruited by Dan Mullen and Billy Gonzales and in 2016. Reese had other offers from the SEC. Alabama and Auburn were in the mix, but Reese ultimately decided to play for Dan Mullen and his staff. However, Mullen left Mississippi State in 2017, and Reese stayed in Starkville to finish his education.

Now, as a graduate transfer, Reese can come to Florida, and be eligible to play immediately.

Stewart Reese doesn’t just know the Florida coaching staff pretty well. He also will have the chance to go up against his younger brother in practice. Stewart’s brother David is a linebacker and will be a redshirt sophomore this season.

What getting Stewart Reese means for Florida

First, Reese is an experienced player in the SEC, which is huge because Florida’s line is still somewhat young. Reese comes in as a player who was a reliable starter at Mississippi State. He started 26 straight games while in Starkville.

Also, Reese is a versatile lineman. He has been able to play both guard and tackle and has proven to be good at both. His versatility and experience give Florida options they didn’t have last year.

Finally, The Gators’ overall offensive line depth is helped by this move. Florida’s offensive line was not their strongest position last year, and adding Stewart Reese gives the Gators a chance to really solidify that group going into this year.

Dan Mullen and the transfer portal

Coach Mullen has already been known for bringing in immediate impact players through the transfer portal. We’ve already seen guys like Van Jefferson, Trevon Grimes and Jonathan Greenard take off in Florida’s system.

Mullen has also brought in other transfer players that will be able to play this season. Running-back Lorenzo Lingard transferred from Miami. Edge-rusher Brenton Cox Jr. was brought in from Georgia.

Former 5-star recruit at wide receiver, Justin Shorter, transferred to Florida from Penn State. He will need a waiver if he is going to play immediately. Otherwise, Shorter will have to sit out a year.

Coach Mullen has been able to make some great moves in the transfer portal, and we will see if they can lead to another great season for the Gators.