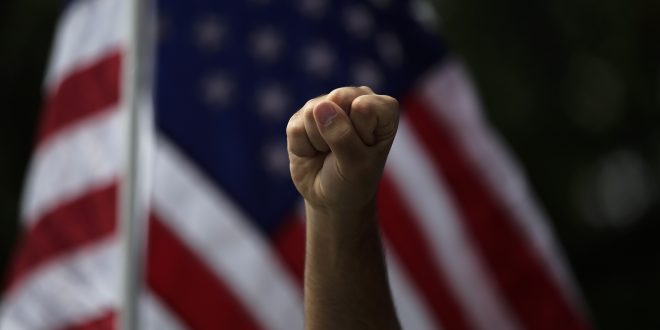 A demonstrator raises his fist during a protest Monday, June 1, 2020, over the death of George Floyd, in Anaheim, Calif. (AP Photo/Jae C. Hong)

The last several days across the U.S. have been nothing short of violent, disastrous.

Cities have been torn apart. Businesses broken into or burned to the ground.

It all comes in response to the death of George Floyd — an African American man who died after a police officer in Minneapolis, Minnesota was seen continually kneeling on his neck for several minutes causing him to go into cardiac arrest.

The incident has sparked an outcry from citizens around the country. Players from across numerous sports have also voiced their feelings on the matter, as well.

Thoughts From the NBA Community

Reactions to the Floyd situation have poured in from a number of athletes and coaches throughout the league. Some have been vocal through social media, while others have physically joined in on the protests occurring in their cities.

Trae Young and Jaylen Brown are just a few of the players who have decided to try and make a difference themselves. On Monday, Young made a return trip to his hometown of Norman, Oklahoma to deliver a speech on the topic of police brutality and racial injustice.

Similar to Young, Brown also wanted to make an impact close to his community, as well. Brown is originally from Marietta, Georgia and made the 15-hour trip from Boston to help lead a peaceful protest in Atlanta on Saturday night, according to an article on ESPN’s website.

Former NBA star Kareem Abdul-Jubbar said seeing athletes use their platform to promote change in the world is something great to see.

He also said one thing that could be beneficial in a time like this. He said meet and build relationships with someone who may look a little different than him or her.

The ongoing frustrations stemming from George Floyd’s death have not only had an impact on those in the football and basketball world, but in the WWE universe, as well.

O’Neil said the problems go far and beyond someone’s skin color. Some of the real issues lie in how the justice system is set up today.

When asked whether he thinks this recent outrage relating to violence towards African Americans will spark some sort of change, O’Neil said it’s difficult to tell.

These are certainly unprecedented times for the country. Will there be change? Is this finally the time where enough is enough? O’Neil said it starts by being better people.

Sound used in this story is courtesy of ABC Newscall and Sportscene with Steve Russell.