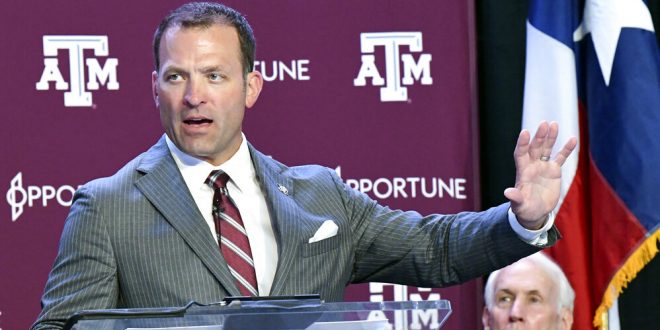 FILE - In this June 3, 2019, file photo, Texas A&M athletic director Ross Bjork, left, addresses media and A&M athletic staff in the Hall of Champions in College Station, Texas, as interim athletic director R.C. Slocum, right, looks on. The scheduled start of college football season is fewer than three months away, and there are plenty of reasons to be hopeful that games will be played Labor Day weekend. Texas A&M athletic director Ross Bjork said the school has conducted just under 500 COVID-19 tests on coaches, staff and athletes since May 18. The Pac-12 is the only major college football conference in which all the members have agreed to test all returning athletes for COVID-19. (Dave McDermand/College Station Eagle via AP, File)

It seems like college football is on the horizon. Currently, the NCAA is in the process of determining the manner in which the sport will return.

The NCAA Division I Football Oversight Committee is on the task. It will put the finishing touches on a new preseason practice plan on Thursday.

Details of the plan

In its entirety, the plan spans eight weeks, including the final six weeks dedicated to practice. The committee divided the plan into three sections.

Before official practice, required summer workouts and film review will begin on July 13. This will precede the six-week practice slate.

Then, enhanced training would start on July 24. While the other two parts of the plan are typical for preseason, this would be a new addition.

The enhanced training will include walk-throughs of plays with a football and team meetings. Its main focus is for coaches to determine the physical and mental readiness of their players.

Finally, four weeks of preseason camp would begin on August 7. Camp would end just in time for Week 1, which is on September 5, Labor Day Weekend.

On the other hand, some schools scheduled games for Week 0, which is on August 29. In these cases, each phase of the plan would move up a week. Therefore, the earliest that some college football programs could resume mandatory activities is July 6, which is less than a month away.

After the committee finalizes its draft of the plan on Thursday, approval is still necessary. The NCAA Division 1 Council will vote on the new plan during its next meeting on June 17.

According to Todd Berry, executive director of the American Football Coaches Association (AFCA), most NCAA coaches that he talked with supported the plan. Only time will tell if the NCAA supports the plan as well.

Florida takes on Alabama. A battle of two college football giants in Gainesville for the …