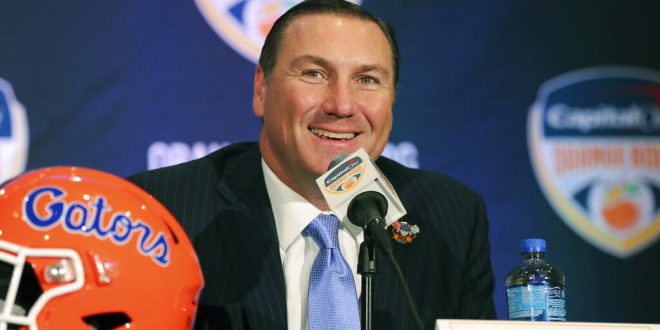 The 2020 college football season kicks off in 73 days, hopefully. Head coach Dan Mullen sat down with reporters in a Zoom press conference to discuss Gator football.

Players are beginning to return to campus, but for voluntary workouts. Mullen says the coaching staff hasn’t pushed any of its players and is “slowly building up” the team to more intense workouts.

Mullen breaks down how the the rest of training camp will go. He says that all players should be back on campus by July 13. Between then and July 24, the team will transition to a “regular summer.” This will be the first time where coaches and staff will have more access to the team.

A lot of what happens next is still in the hands of the NCAA. The current proposal for walkthroughs and expanded team meetings is for July 24 through August 6. Mullen says this time period is crucial for his team.

A big part of the press conference was talking about the coaching staff’s routine. Mullen says this has been one of the most difficult aspects of dealing with this situation.

This “new normal” that college football programs have been dealing with is a different experience for every program. Mullen talks about how his staff has handled it and even talks about recruiting.

Kyle Trask’s journey to starting QB at Florida is one of perseverance, growth and development. Inserted as the starter last season on a moments notice, Trask enters the season as arguably the best quarterback in the SEC. Mullen talks about what a full offseason can do for his confidence.

If Trask is able to be better than last year, there’s no telling how good the offense can be. Even with key departures on the offensive side of the ball, Van Jefferson, La’Mical Perine and Freddie Swain, the offense is set up to be even better. The offensive line is more experienced, Kyle Pitts has emerged as one of the best tight ends in the country and former five-star running back Lorenzo Lingard joins the roster.

In addition, the wide receiver room is always generating talent. Mullen says it’s time for players like Trevon Grimes and Jacob Copeland to be leaders at the position.

Another position group Mullen talks about is the linebackers. The Gators return a couple key starters including James Houston and Ventrell Miller. Mullen talks about how the young and old guys have mixed in the early weeks of the offseason.

Mullen commented on the social issues going on in America. He said he’s using this time to have meetings with players and is educating himself.

Year three of the Dan Mullen era is set to begin on September 5. Only time will tell whether this is actually the case as the Gators look to make another leap in the SEC and national rankings.