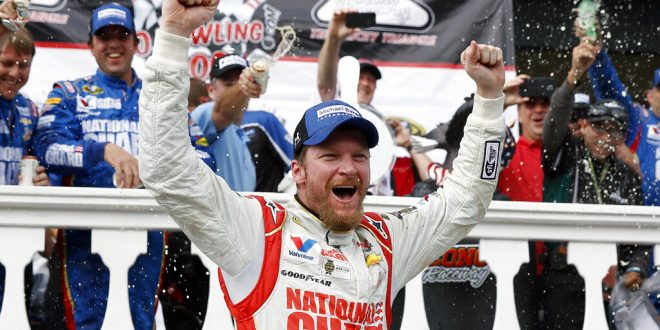 Dale Earnhardt Jr. will join his late father in the NASCAR Hall of Fame headlining the class of 2021 that also includes Mike Stefanik and Red Farmer.

Earnhardt Jr. is a first-ballot Hall of Famer with 26 cup wins, two Xfinity Series titles and two Daytona 500 titles (2004 and 2014). In addition, he was voted the most popular series driver 15 times showcasing how he was “the face” of the sport for some time.

NASCAR selects five members of 20 nominees every year for the Hall of Fame. Earnhardt Jr. earned 76% of the votes. He and his father are now the sixth father-son duo in the Hall.

Paving a path of his own both on and off the track, we can't wait to celebrate the career of Dale Earnhardt Jr., NASCAR Hall of Fame Class of 2021 inductee. #NASCARHall #NASCARHOF #racing #NASCARHistory #NASCAR pic.twitter.com/BT76HNY47C

"There's one person outsmiling everybody else up there (in Heaven) right now, and that's your dad."

A chat between @DaleJr and @DaleJarrett, and Earnhardt's push to make people proud en route to making the @NASCARHall. pic.twitter.com/2ASPa8nHRA

In addition to being a great driver, Earnhardt could be considered an even better ambassador for the sport. He had the ability to bridge generations of fans because of his style on and off the racetrack.

“I know what my numbers are and I feel like that I was chosen based on that but also on the impact off the racetrack and being an ambassador for the sport,” Earnhardt Jr. said. “As I got older, I really started to think about the health of the sport.”

Mike Stefanik was a seven-time Whelen Modified Tour champion and many believe his induction is long overdue. He was the Craftsman Truck Series Rookie of the Year in 1999. Stefanik was voted the most popular driver seven times between the Busch North Series and the Featherlite Modified Series. He died in a plane crash in 2019.

Mike Stefanik, a Modified Tour legend, will be inducted into the #NASCARHOF. pic.twitter.com/yusYRbt1oE

Red Farmer was a part of the Alabama Gang. The famous “gang” is a group of NASCAR drivers who set up shop outside of Hueytown, Alabama in the 1950’s. Farmer has won four championships across four different divisions. He was named one of NASCAR’s 50 greatest drivers in 1998 and at the age of 87, he is still racing.

Red Farmer began racing in the late 1940s & won more than 750 races, including many on the dirt tracks of Alabama, Farmer’s adopted state,where he become a respected member of the “Alabama Gang.” We’re honored to officially welcome Red Farmer to the #NASCARHall Class of 2021. pic.twitter.com/DyXw8ILpaq

This is certainly an interesting time for NASCAR fans. The sport has made headlines for its recent banning on the Confederate flag. In addition, it is one of the only live sports going on and just had its most recent Hall of Fame class announced. The next race will take place this Saturday with the Unhinged 300 from Talladega Super Speedway.

NASCAR hosts 20,000 fans in the biggest crowd in pandemic history

Kevin Harvick won the Brickyard 400 for the second year in a row. It’s Harvick’s …