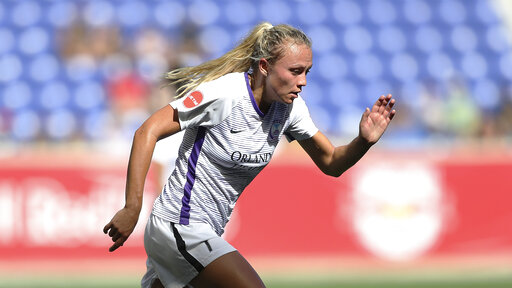 Orlando Pride forward Claire Emslie (7) runs up the pitch during the first half of an NWSL soccer match against Sky Blue FC, Sunday, Sept. 29, 2019, in Harrison, N.J. (AP Photo/Steve Luciano)

Some of the tests were still inconclusive and have the potential of turning out negative.

Ever since screenings for the team began, the club had to quarantine a very large group of athletes and staff. Because of this, the Pride was not able to have a complete roster to participate in the NWSL tournament. According to an Orlando Pride news release, everyone who tested positive was asymptomatic.

The team had their first game scheduled for Saturday against the Chicago Red Stars. They were departing to Utah for this opening day challenge on Wednesday.

These cases seem to have originated from a group of athletes that recently visited a bar in Orlando. After this outing, the club completed additional testing that exceeded typical standard for NWSL clubs.

Athletes involved in this outing exposed other team members, which resulted in the 10 positive cases.

The affected team members and staff will be in isolation for 14 days. Housemates or anyone who came into contact with the affected will be closely monitored.

The league is now in the process of adjusting the tournament format to eight teams.

“We’re all obviously disappointed, but in the current environment, this is a situation that we have prepared for and we will now adjust our plans and schedules to reflect the circumstances.” said NWLS Commissioner Lisa Baird.

The NWSL’s approach to ensure the safety of athletes and staff is very different from other leagues.

For example, the NBA will require players to quarantine at ESPN Wide World of Sports. They will be quarantined for at least 15 days before their first scrimmages.

The Major League Soccer also has a quarantine period. Orlando City will spend spend 13 days inside its Disney Bubble before its first match.

Unlike these other leagues, Orlando Pride was scheduled to land in Utah on Wednesday, and play its first game on Saturday.

The club had requested to fly 10 days before opening day. This would have given the team enough quarantine time.

The request was denied and the club was told that the earliest they could fly to Utah was Wednesday, June 22nd.

“This was obviously a difficult and disappointing outcome for our players, our staff and fans, however this is a decision that was made in order to protect the health of all involved in the Challenge Cup”

Pride coach Marc Skinner’s time in Orlando depended in this tournament. After a devastating 4-16-4 run last season, Skinner was hoping to prove him and his team are better than that.

Some athletes were also looking at this season as a chance of redemption. Defender Toni Pressley was looking for a comeback season after beating breast cancer diagnosis received in 2019.

Striker Sydney Leroux was ready to prove that she could perform at the highest level even after giving birth to her second child last July. She expressed on her social media how “heartbroken” she felt after the withdrawal.

Orlando Pride has confirmed that no one who tested positive on the team came into contact with Orlando City and Orlando City B members.

Everyone in the Orlando City roster and staff members tested negative for the virus on Sunday. They will be re-tested before entering the bubble at ESPN Wide World of Sports.

Camila is a senior at the University of Florida studying Telecommunications with a specialization in production and a minor in Innovation. She is also seeking a Sports Management certificate. Camila is also WUFT's news director as well as a sports reporter/anchor.
@CamilaMaffuz
Previous NBA Orlando Plan has COVID Troubles
Next How GEICO 500 Changed NASCAR 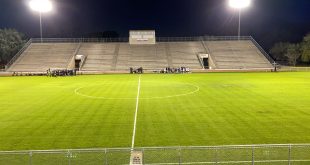