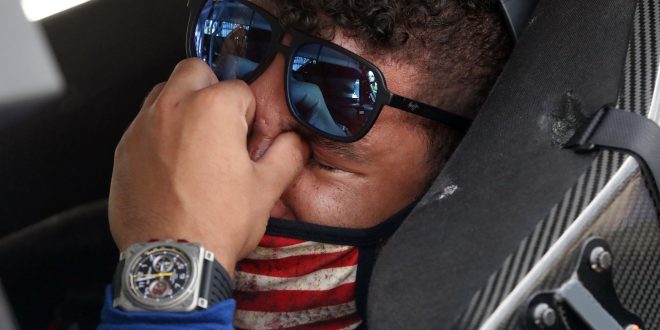 Driver Bubba Wallace, right, is overcome with emotion as he sits in his car prior to the start of the NASCAR Cup Series auto race at the Talladega Superspeedway in Talladega Ala., Monday June 22, 2020. A noose was found in the garage stall of Wallace’s car yesterday. (AP Photo/John Bazemore)

The NASCAR GEICO 500 race at Talladega was postponed from Sunday to Monday at 3 p.m. due to weather. An additional hour delay was then suffered at lap 58. Yet, the Talladega Superspeedway race still reached a desired hair-raising completion with Ryan Blaney grabbing 1st place from Ricky Stenhouse Jr by .007 seconds.

Then, Aric Almirola’s No. 10 Ford crossed the finish line almost completely backward for the third-place position. Blaney’s victory was his first of the season and fourth overall.

Yet, these may be considered minor details when juxtaposed with the moments that occurred before and after the race.

“I Stand With Bubba Wallace”

On Sunday evening, a rope noose was discovered in the garage stall of NASCAR’s only Black driver Bubba Wallace. Yet, the alleged hate crime seemingly designed to tear a movement apart instead only fueled its fire.

Prior to the start of the race, all 39 other NASCAR drivers and their teams pushed Wallace’s Chevrolet to the front of the grid. Wallace exited his car in tears and his competitors greeted him with hugs. Richard Petty or “The King”, the 82-year-old Hall of Famer, stood beside Wallace as the National Anthem was played.

In addition, the message “#IStandWithBubba” was painted on the infield grass of the Superspeedway.

“One of the reasons that it was so beautiful is because it was initiated, facilitated and executed by the driving core. This wasn’t some PR thing by NASCAR. This was a group of men standing behind a peer and a brother. It was just one of the most amazing moments I’ve ever seen in this sport,” said ESPN’s Marty Smith.

Smith continued to say that it was undeniable that this was the beginning of a new NASCAR. Within the speedway, there was not one confederate flag to be seen. Although Bubba Wallace placed 14th in the Talladega race, fans chanted his name as if he had placed much higher. After the race, Wallace stated that he can see the sport changing.

“I wanted to show whoever it was that you‘re not going to take away my smile. I‘m going to keep on going. I‘ve been a part of this sport for a really long time,” Wallace told reporters.

It's moments like this that make us proud to have @BubbaWallace in the garage every weekend. pic.twitter.com/pJKQievxjP

The FBI began an immediate investigation of the situation. They concluded that the noose could have been there as early as last fall. The FBI stated that the noose did not appear to be a hate crime. The report was met with some backlash on social media.

Regardless, Wallace’s competitors recognizing him as an equal brother was important for the racing community and the world to see. Let us stray from a war of race and focus on the driver’s actions that were clearly done out of love and support for Wallace and Black lives.

The NASCAR Cup Series’ next races will be back to back on Saturday and Sunday for the Pocono Organics 325 in Pennslyvania.

Parker Welch is a Junior at the University of Florida majoring in Sports Media at the College of Journalism & Communications.
@parkerrwelch
Previous Orlando Pride Withdraw from NWSL Cup After Positive COVID-19 Cases
Next Baseball is Back! For Real!