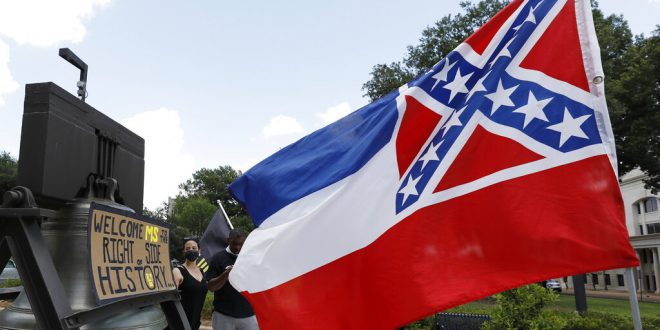 A Mississippi state flag waves adjacent to a flag change supporter's sign that welcomes the state to "the right side of history," outside the Capitol in Jackson, Miss., Sunday, June 28, 2020, while lawmakers are expected to consider state flag change legislation. Mississippi Governor Tate Reeves has already said he would sign whatever flag bill the Legislature decides on. (AP Photo/Rogelio V. Solis)

On Sunday, the Mississippi State Legislature voted to change the state’s flag. Mississippi’s abandonment of the flag means that all state flags in America are Confederate-emblem free.

The change in Mississippi’s flag marks the latest in changes that have come in the weeks since the death of George Floyd.

In these times, athletes no longer wanted to represent a state that had the Confederate emblem on their flag. Miss State running back Kylin Hill said he would not play for the Bulldogs next season unless the flag was changed.

On June 18, 2020, SEC Commissioner Greg Sankey said no conference championship would be held in Mississippi unless the flag was changed.

The conversation isn’t over.

We stand with the thousands of Mississippians calling for a change in our state flag.

There’s no room for hate in our state. pic.twitter.com/TQEuUhWH40

Head coaches Lane Kiffin (Ole Miss) and Mike Leach (MSU) were among coaches that address the state legislature on June 25. Kiffin told ESPN the flag does not represent Ole Miss and a new flag would lead to a “more welcoming environment.”

“We removed the flag from our campus five years ago. So, we’ve made it clear that it doesn’t represent who we are at Ole Miss,” he said to ESPN. “Today is another big step in doing our part to move the state forward and ensure a more welcoming environment for everyone. This is extremely important to me and to our players. Time to change.”

Former Ole Miss basketball guard Blake Hinson said the flag was a factor in his decision to transfer. Shortly after Hinson’s transfer, Mississippi lawmakers began the move to change the flag.

Response to the Change

Hill kept his response to the move to change the flag short.

Sankey praised the coaches in Mississippi that spoke out against the flag.

Harrison is a sports coordinator at ESPN 98.1 FM/850 AM WRUF. He served as a beat writer for Florida Gators football for the 2019 and 2020 seasons. He also contributes to WRUF's Gainesville Sports Center segments and makes appearances on the Clash on Harp on Sports. Harrison has been a content writer for WRUF since January 2019 as well.
@HarrisonSmaj
Previous PGA Tour Getting Stricter with Protocols
Next Cam Newton Joins Patriots