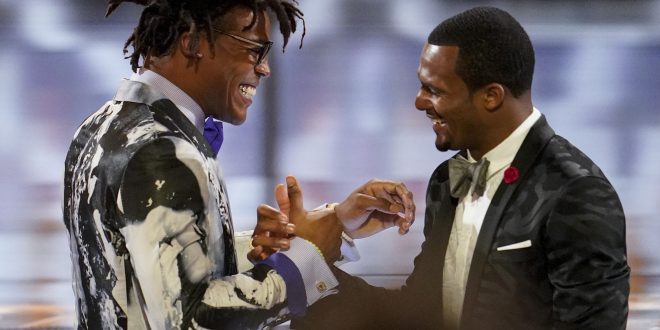 Former NFL MVP Cam Newton signed with the New England Patriots on Sunday. The one-year contract is set to be at $7.5 million with incentives. Newton was considered a top candidate to replace Tom Brady.

Without the contract incentives, the deal is only worth the league minimum of $1.05 million. Considering Newton is an NFL MVP, the Patriots have faced criticism.

49ers cornerback Richard Sherman said via twitter, “How many former League MVPs have had to sign for the min? (Asking for a friend.) just ridiculous. A transcendent talent and less talented QBs are getting 15/16m a year. Disgusting.”

Although the quarterback is only 31-years-old, he carries a resume of injuries, which likely led to his release in March. In the last three seasons, he fought through two shoulder surgeries and a foot fracture. This may be something to consider in regards to the contract. Patriots’ ESPN writer Mike Reiss believes they’ll bring Newton in and assess where they need to protect him and how they can accentuate his strengths.

Joining @Espngreeny and @GetUpESPN to talk Cam Newton and the Patriots. pic.twitter.com/U27IMVNCJg

To contrast, Newton amassed $20 million per year on a five-year, $103 million deal with the Carolina Panthers. Therefore, even if Newton is able to complete all of the contract incentives, it is still significantly less than others have valued him at.

Former NFL Patriots QB Matt Cassell stated that he doesn’t believe the Patriots are looking for a new Tom Brady, but the next franchise guy that is going to continue to lead this organization down the right path.

“Cam Newton has shown that he is capable of that, he’s obviously done it in the past with Carolina, so if he goes out and performs then there’s no doubt in my mind that it could be a long term landing spot for Cam,” said Cassell.

Newton will be arriving at the scene late.

“Anytime you have such a short notice and short time period before you start, it’s going to be a cram session. The offensive structure itself and the terminology and everything they put on a quarterback, he’s definitely going to be starting from behind and needs to get caught up as quickly as possible,” continued Cassell.

Although, it is clear that both his former and new teammates are supportive of his new opportunity. Carolina Panthers Ryan Kalil tweeted, “I never thought I’d be excited to watch the Patriots and root for them in this way.”

The opportunity is there for the taking.

Parker Welch is a Senior at the University of Florida majoring in Sports Media at the College of Journalism & Communications.
@parkerrwelch
Previous Mississippi Changes Flag
Next Dustin Johnson Takes The Travelers Championship