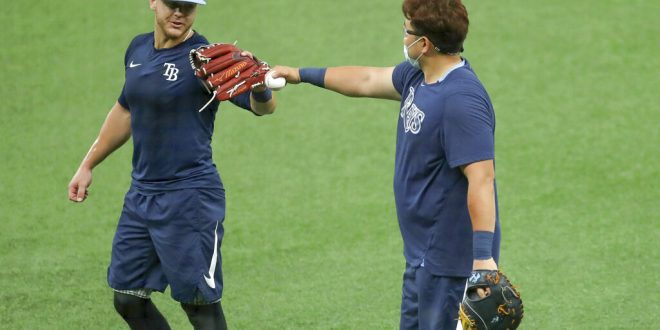 Or Spring Training 2.0. Whatever you wish to call it. The MLB season is less than three weeks away, and players are reporting back to get ready for play.

While many players return enthusiastically, some won’t return in 2020.

The COVID-19 pandemic remains an issue as baseball attempts to have a season. The league conducted its first major round of testing last week. The results showed 1.2 percent of those tested came back positive. While this is significantly lower than the NBA’s and MLS’s test results, key names were within that 1.2 percent.

The most notable positive test is Braves’ first baseman Freddie Freeman. His wife, Chelsea, said Freeman has had aches and pains, and “this virus hit him like a ton of bricks.”

Braves manager Brian Snitker said it will be a bit before Freeman returns.

Some Players Opt-Out; Others Considering It

Players are still deciding whether they are participating in 2020. Some have already said no. Dodgers pitcher and former Rays ace David Price is among the notable names to have opted out of 2020. The 2012 Cy Young Award winner made his announcement via his Twitter page.

Braves pitcher Felix Hernandez is also choosing not to play despite trying to salvage his career. Maybe, we’ll see him in 2021, or this could mean we’ve seen the end of King Felix. That was a great possibility before the pandemic.

There are other players who haven’t officially opted and are participating in practice but might still do so. The biggest name is nonother than Mike Trout. Trout remains on the fence as his first child is expected to be born next month.

Players Who Return are Ready to Play

Those who are returning, while cautious, are ready to play. Dodgers ace Clayton Kershaw said he was happy to be at the field with his teammates.

For some, the eagerness to play is very, very high. Rays shortstop Willy Adames said he wants to play all 60 games of the season. Fellow teammate Daniel Robertson said it would take the season stopping to get him off the field.

#Rays Adames said he wants to play in all 60 games

MLB will be releasing its 2020 schedule tonight at 6 p.m. during MLB Tonight on MLB Network.

Harrison is a sports coordinator at ESPN 98.1 FM/850 AM WRUF. He served as a beat writer for Florida Gators football for the 2019 and 2020 seasons. He also contributes to WRUF's Gainesville Sports Center segments and makes appearances on the Clash on Harp on Sports. Harrison has been a content writer for WRUF since January 2019 as well.
@HarrisonSmaj
Previous Gators’ Langworthy Signs with Tigers
Next Bryson DeChambeau wins the Rocket Mortgage Classic