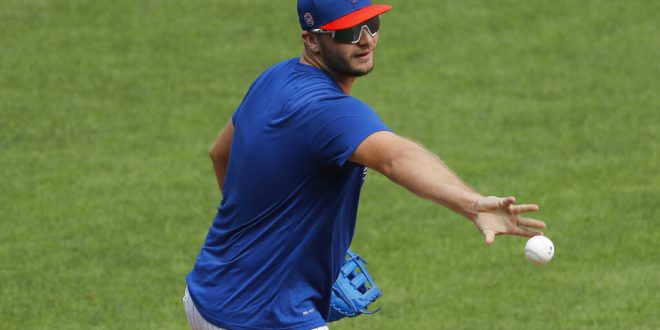 While many opt-out, former Gator and Mets first baseman Pete Alonso is here to play. Last week, MLB summer camp got underway. Alonso and the Mets prepare to compete in the National League East in 2020 and get back in the postseason.

There are few players as excited to get back on the field as Pete Alonso. He said he found a new appreciation returning from the stoppage.

Alonso is certainly looking to show his historic rookie season was no fluke.

An Instant Hit in Queens

Alonso’s stint in the minors was short. Just 255 games. Going into 2019, MLB.com ranked Alonso as the Mets’ top prospect. Mike Rosenbaum wrote that Alonso “could be the farm system’s lone impactful contributor in 2019.” To say he was an impactful contributor would become an understatement nearly off the bat (pun intended).

Alonso finished the month of April batting .292 with 9 home runs and 23 RBIs. By game 60 of the season, he was a 20 home runs and 45 RBIs. He received the NL Rookie of the Month Honor twice before the All-Star Break. He found a way to turn more heads when the break came. Alonso received his all-star game selection and was invited to participate in the 2019 Home Run Derby.

Alonso won the Home Derby, beating out the highly anticipated Vladimir Guerrero Jr. in the final round.

In the All-Star Game, Alonso hit a two-run single off of Indians pitcher Brad Hand in the top of the 8th inning to put the NL within a run.

On Sept. 28, on the second to last day of the regular season, Alonso was tied with Judge at 52. In the bottom of the third with two out and a 2-1 count, Alonso belted a 93-mph pitch of Braves pitcher Mike Foltynewicz to right-centerfield to take the rookie home run crown. Alonso pointed to the sky with both hands and circled the bases as 32,210 fans gave him a standing ovation.

Alonso finished the season with a slash line of .260/.358/.583 with 53 home runs and 120 RBIs. He was awarded the NL Rookie of the Year award and finished seventh in the NL MVP voting.

Alonso’s pears have his expectations for him in the upcoming 60-game season. Mets third baseman J.D. Davis thinks Alonso can hit 30 home runs in the shortened season.

Alonso said he is excited to give the city of New York and Mets fans something to cheer for after being hit hard by the coronavirus. They might not be able to see the games in person, but he knows they’ll be watching.

The 2020 season for Alonso and the Mets starts with Opening Day at Citi Field against the Atlanta Braves July 24.

Harrison is a sports coordinator at ESPN 98.1 FM/850 AM WRUF. He served as a beat writer for Florida Gators football for the 2019 and 2020 seasons. He also contributes to WRUF's Gainesville Sports Center segments and makes appearances on the Clash on Harp on Sports. Harrison has been a content writer for WRUF since January 2019 as well.
@HarrisonSmaj
Previous Gators Women’s Tennis Prepares for Future
Next Tre Mann Withdraws from NBA Draft and Returns to Florida for Sophomore Season